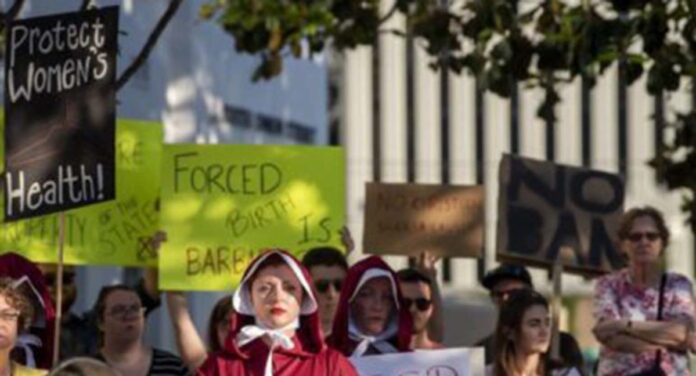 The matter of killing babies is a major issue for Democrats. They believe that mankind has the right to extinguish the lives of the smallest of souls. And to justify their actions, they have changed the word murder into the word abortion.

They have seared their conscience to the point that they are willing to jar up baby parts and let the doctors take them home as trophies.

Life is precious, and there can be nothing more important than saving the lives of the unborn. Liberal judges like to strike down laws that protect life and support laws that end life.

In the state of Ohio, a case that came before the Sixth Circuit Court of Appeals was ruled in favor of life. The court stated that a person could not kill their baby just because it had a Down Syndrome medical diagnosis. Every liberal judge thought that a woman could kill her baby in that case, and all the conservative judges said that killing a child is murder.

Bill Clinton and Barack Obama are the two liberals that stacked the court system with horrible baby killing judges. Their selection of judges is lawless people that believe politics should come before doing the right thing. They have no problem ignoring the Constitution and ruling along party lines.

Amul Thapar is a judge that George W. Bush appointed. And when an abortion matter came before him, he was willing to do the right thing and rule for life and not popularity. The matter at hand dealt with a law that Tennessee had passed that allowed for a 48-hour waiting period before an abortion could occur.

The law was put in place to investigate whether it was something the mother wanted or if she was being forced into it. Throughout the process, the liberals attacked the law and took the matter to court, where liberal judges struck it down. And when the state asked for a stay while they appeal, the two liberal judges on the panel voted no while Thapar voted yes.

The two liberal judges noted that the state’s request was “yet another unnecessary, unjustified, and unduly burdensome state law that stands between women and their right to an abortion.”

He stated that “Since Casey, no federal appellate court has successfully struck down an abortion waiting period. Why? Because the Supreme Court says that waiting periods are constitutional. Planned Parenthood of Se. Pa. v. Casey, 505 U.S. 833, 881–87 (1992) (plurality opinion). Indeed, both the Supreme Court and our court have upheld such laws. But here the majority, like the district court before it, decides to chart its own course. In doing so, the majority ignores Supreme Court and Sixth Circuit precedent, as well as the correct legal standard. Given the weighty interests involved in this case, the majority’s failure to issue a stay merits immediate correction either by our court or a higher one. After all, ‘it is not our place to ignore precedent and push our own agenda.’ United States v. Navarro, 986 F.3d 668, 675–76 (6th Cir. 2021) (Moore, J., dissenting)”

Thapar took his fellow judges to the cleaners, and when the state brought the matter to the entire court, they won on a 10-6 vote in favor of the waiting period. The other two liberal judges tried to overrule a Supreme Court ruling and had their pride seared in the process.

The Democratic judges love to play with abortion cases. They see life as a joke and something they can use to keep the liberals in power and favor people. But Thapar and others are sick and tired of the games, and his actions prove that one person can make a difference in America.

And if someone wants to stand up and make a difference, they can as long as the Democrats do not change the rules too much.