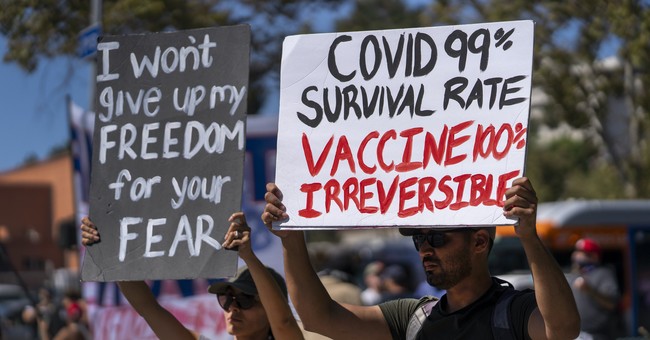 In the fog of the crappy news coming out of Biden’s America, with the eighty-one million supporters he has (snicker snicker), it is refreshing to, on occasion, find a surprising news nugget. America’s backbone may be stiffening on getting the COVID jab to keep your job.

I’m encouraged by this small ray of sunshine.

I’m sure most everyone by now has heard of some of the bigger instances of employees giving the middle finger salute to mandates. Probably the one that DEMANDED news coverage was the Southwest pilots saying “no mas” which effectively shut down air travel for a whole bunch of people. My compadre and colleague here at Red State Brad Slager covered this earlier this month with this piece Slowing the Spread of the Mandates — Southwest Airlines Announces It Will Drop Plans to Furlough Unvaccinated Workers. A brief refresher from that article…

While a number of businesses capitulated to the impending mandates ahead of implementation, many have been faced with resistant employees. News has come from Southwest Airlines that they are stepping back from the strong implementation of the mandate. By December 8, employees were set to either be vaccinated or face what was essentially a furlough. Now the company has changed that stance, as it has been facing pushback from a number of areas.

In a letter sent to employees, it is now saying that those who are remaining unvaccinated due to medical reasons or religious opposition will be placed under review while retaining their employment status.

Southwest’s senior vice president of operations and hospitality, Steve Goldberg, and Julie Weber, vice president and chief people officer, wrote to staff on Friday that if employees’ requests for an exemption haven’t been approved by Dec. 8, they could continue to work while following mask and distancing guidelines until the request has been reviewed.

“This is a change from what was previously communicated. Initially, we communicated that these Employees would be put on unpaid leave and that is no longer the case,” they wrote in the note, which was reviewed by CNBC.

Well, now comes news that possibly mainstream America is catching some of that Southwest pilot fever (the kind of fever you want to catch) and willing to quit their job rather than get jabbed. A new study was done by the Kaiser Family Foundation and I’m a bit surprised at the numbers.

First up, if you had a choice of getting the jab or doing weekly testing this is what KFF found…

So just 11% of those polled would just get the shot. The number of people who would opt for weekly testing jumps to 46% and those giving the bird on the way out the door is a healthy 37% which is quite respectable. Now, what would happen if the employer required you to get the jab to keep your job?

I have to admit that the 72% of those questioned here would leave their job really stunned me.

Ten years ago, if people in this country were given the choice to take a shot or keep their livelihood I would have said 80% would have given the one-finger salute. After what we have seen over the past 15 months, I have been disheartened with what I thought was the breaking of the American people and their spirit to just roll over to do what they are told.

Now though, this poll gives me some hope.

Maybe there are still enough Americans who are willing to stand up and tell the government of the people by the people and for the people that WE THE PEOPLE have had enough of this nonsense.

Maybe we can stop the founders from spinning in their graves on one issue.