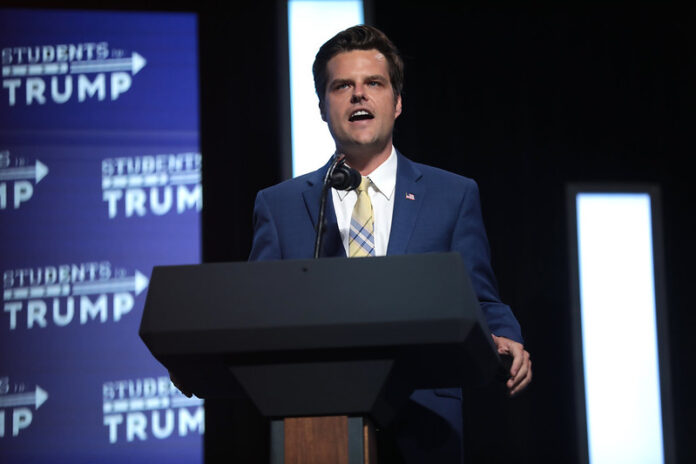 CNN director let the cat out of the bag on what his company is doing to try and squash a particularly troublesome voice on the right in a disturbing revelation uncovered by Project Veritas and reported on by Fox News.

That voice, of course, is Florida Rep. Matt Gaetz who is being investigated (possibly targeted?) over accusations of statutory rape. Gaetz is accused of having a relationship with an underaged girl and, according to Gaetz, was offered a way to bribe his way out of the Department of Justice investigation that has ensued.

James O’Keefe’s Project Veritas released their explosive video on Tuesday which showed CNN Technical Director Charlie Chester admitting on camera that his network is purposefully giving more air time to coverage of Gaetz “to keep hurting him” because it would be “great” for the Democrat Party (uhh, objective journalism, hello? anybody home??).

“If the agenda say[s], is to like get, like Matt Gaetz right now, he’s like this Republican,” Chester said. “He’s a problem for the Democratic Party because he’s so conservative and he can cause a lot of hiccups in passing of laws and what not.”

“So, it would be great for the Democratic Party to get him out. So, we’re going to keep running those stories to keep hurting him and make it so that it can’t be buried and like just settled outside of court and just like, you know, if we keep pushing that, it’s helping us,” he added. “That’s propaganda because it’s helping us in some way.”

“I don’t know. I- yeah,” Chester responded after initially struggled to answer the question when asked if his network intentionally put out propaganda to manipulate the public.

In addition to having a relationship with an underage female, Gaetz has been accused of making payments for sex and sex trafficking. The outspoken Republican has garnered more than a few followers, including those outside his own district, with many on the right cheering on the Trump supporter.

The congressman has denied wrongdoing in the strongest possible terms and blasted the calls for his resignation.

“Since I’m taking my turn under the gun, let me address the allegations against me directly. First, I have never, ever paid for sex. And second, I, as an adult man, have not slept with a 17-year-old,” the Florida Republican wrote in the Washington Examiner, where he described himself as the victim of a diverse group of enemies.

“Folks won’t be surprised that bizarre claims are being made about me shortly after I decided to take on the most powerful institutions in the Beltway: the establishment; the FBI; the Biden Justice Department; the Cheney political dynasty; even the Justice Department under Trump,” he wrote.

“This is how D.C. works. The guilty and wrong point fingers at the innocent and right. Remember President Joe Biden’s Ukraine scandal? Or the Lincoln Project’s professions of moral superiority? Their scorn and moral posturing is all merely projection.

“And no, I am absolutely not resigning.

“My personal life is and always has been conducted on my own time and my own dime. Consensual adult relationships are not illegal. Although I’m sure some partisan crooks in Merrick Garland’s Justice Department want to pervert the truth and the law to go after me, I will not be intimidated or extorted. The battle for America’s future demands gladiators, and I am going to keep getting back up and fighting, every single day.

“The Biden Justice Department would rather investigate me for adult, consensual sex than Hunter Biden for his shady business dealings, than others for illegal leaks, or a former Justice Department official for the evident extortion of a congressman. Go figure.”