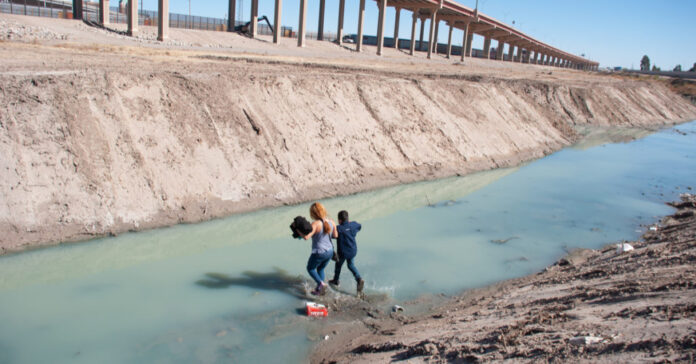 Joe Biden is so resistant to helping Americans live free. He is more willing to throw Republican states under the bus simply because they do not align politically with his liberal agenda. He has deliberately stood in the way of the southern states as they attempt to secure a border that he refuses to deal with. Joe Biden is an anti-American president who wants to see the country destroyed by an invasion of illegals and undercover terrorists.

Texas Governor Greg Abbott leads the state with the most significant portion of the southern border, and his state is seeing the majority of illegal crossings. And he has stated over and over again that the illegals are destroying the country one footprint at a time.

Abbott has led Texans to resume the wall project that Biden ignorantly shut down because he hated that Donald Trump had beaten him at fixing the border. And now he refuses even to help the southern states work out a plan to keep people safe. Instead, he sits in a rocking chair, laughing at the news showing the demise of the people struggling to keep from being attacked by the invaders.

Governor Abbott has other plans, and it includes Joe Biden. One way or another, the old man in Washington is going to pay up. Abbott had applied to the Federal Emergency Management Agency for aid to help secure the border. The issue has gotten so bad that it has turned into a crisis.

But Joe Biden does not see a crisis, so he has refused the aid request of Greg Abbott. This is the second time that Biden has refused to help Texans secure their state, and Abbott has spent millions of dollars dealing with the illegal crisis created by Biden.

FEMA is the agency supposed to pay people and states money when there is a crisis that financially disrupts. The constant invasion takes its toll on people, and Abbott needs the federal government to pay up for its mistakes.

Deanne Criswell is the Administrator for FEMA. She agrees with Biden and cannot stand Republicans taking the bull by the horns and protecting the country. She is the one who officially signed the denial letter that kept Texans from being reimbursed.

The Washington Examiner found and reported that Criswell had some lousy words of rejection for Abbott. She wrote that “After a thorough review of all the information contained in your initial request and appeal, we reaffirm our original findings that supplemental federal assistance under the Stafford Act is not warranted for this event.”

In other words, Texas will get no federal assistance to help pay for the war that Biden started, and they will receive no aid because the old president has turned his back on America and now sides with the enemy. She told Abbott that “Therefore, I must inform you that your appeal for an emergency declaration is denied.”

Abbott has proven that the issue is a crisis based on the level of spending that the state has to do because Biden opened the border. Abbott had to launch Operation Lone Star and empower the state’s National Guard and other law enforcement agencies to deal with the forceful attacks coming up from the south.

The battle for the border has been raging since March of 2021. And to help bolster Abbott’s letter to Biden, John Cornyn and Ted Cruz endorsed the letter. But both of these men are Republican, and Biden will have nothing to do with conservatives he views as domestic terrorists.

Both supportive Senators wrote a letter to the president stating that “In the last eight months alone, over a million individuals crossed illegally into the United States, which is now on pace for over 2 million illegal crossings for 2021.” The affected regions are paying for Biden’s errors out of their accounts. And it is taxing the financial strength of the regions.

Biden wants a weakened America. He wants to see the people flocking to him for help. But he refuses to help those that have asked for aid. He has proven that his heart is not American but one that embraces socialism.