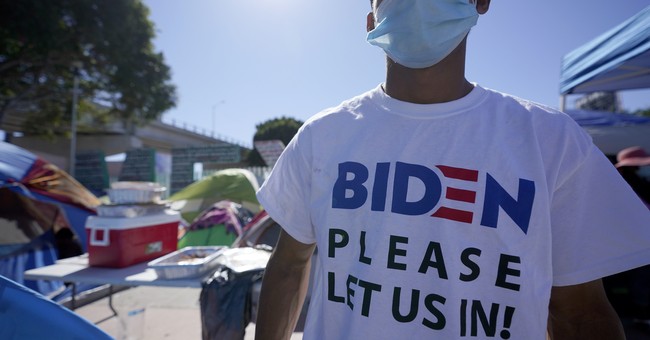 If the Biden administration were trying to convince Americans it had little sympathy for the economic distress, growing shortages, and job uncertainty many are facing, one way to do it would be to offer an extreme amount of money to illegal immigrant families who claim they were victims of separations under Trump’s zero-tolerance immigration policy.

It sounds insane, right? Well brace yourselves. That is, in fact, what the Biden administration is in talks to do.

And extreme is perhaps not a strong enough word.

The Biden administration is in talks to offer immigrant families that were separated during the Trump administration around $450,000 a person in compensation, according to people familiar with the matter, as several agencies work to resolve lawsuits filed on behalf of parents and children who say the government subjected them to lasting psychological trauma.

The U.S. Departments of Justice, Homeland Security, and Health and Human Services are considering payments that could amount to close to $1 million a family, though the final numbers could shift, the people familiar with the matter said. Most of the families that crossed the border illegally from Mexico to seek asylum in the U.S. included one parent and one child, the people said. Many families would likely get smaller payouts, depending on their circumstances, the people said.

Although the numbers aren’t final, the payout could reach the staggering amount of more than $1 billion.

That’s a whole lot of cheese for what the families say were health, mental and otherwise, problems caused by actions they themselves decided to inflict on their children when they made the decision to enter the country illegally.

Nonetheless, in a “complicated [and] complex piece of litigation,” 940 legal claims have been filed by families who say they were “forcefully broken up” after crossing into the United States from Mexico. The families filing the claims say their children were traumatized and suffered from a range of ailments — including “anxiety” and a “fear of strangers” — all apparently justifying the average claim of $3.4 million payout per family.

The Biden administration has been in talks designed to reach an agreement on the claims, although some involved are having troubling stomaching the fact that the payouts amount to more than the victims of 9/11 received.

Other people said senior departmental officials were in alignment on the amount and disputed the 9/11 comparison, given that the U.S. government hadn’t been responsible for the Sept. 11, 2001, terrorist attacks. The 9/11 victim compensation fund averaged awards to the dead of around $2 million, tax-free, at the time an unprecedented payout, the administrator of the fund has said.

The American Civil Liberties Union (ACLU), representing at least one of the families in the case, believes the payout isn’t enough; the families should also be given a pathway to remain in the country past the three year grace period they’ll be afforded should the deal go through.

“President Biden has agreed that the family separation policy is a historic moral stain on our nation that must be fully remedied,” said Lee Gelernt, deputy director of the ACLU’s immigrant-rights project and a lead negotiator on one of the lawsuits. “That remedy must include not only meaningful monetary compensation, but a pathway to remain in the country.”

Meanwhile, Americans are staring at increasingly empty store shelves; being told to lower their consumer expectations; are being fired or forced to quit their jobs over vaccine mandates; and watching helplessly as the Biden administration attempts to address the massive supply chain problem by fining cargo ships stuck offshore, all while Biden’s Secretary of Transportation finally deigns to make an appearance after months on leave.

A cynical person might be inclined to believe that paying people who break the law exorbitant amounts of money might actually incentivize more lawbreakers to take their chances on a journey to the Southern border. A rational person might agree.