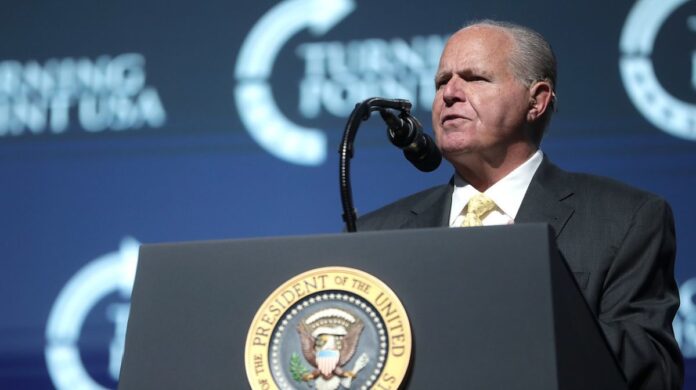 Rush Hudson Limbaugh III was an American icon. On February 17, 2021, the world became that much poorer for not having him in it, and grief over the loss of his voice is something many of us will carry with us for a long time.

For his little brother, David Limbaugh, however, the loss is much more personal. The two Missouri natives were born to a politically active family and both lived up to that legacy in huge ways.

“Losing Rush has been tough,” David said in a tribute to his brother published by The Daily Wire.

“Our parents instilled in us — and we thoroughly absorbed — their Christian values: their love of God; their unconditional love for each other and for us; their belief in moral absolutes, of truth, of right and wrong; the paramount importance of family; the critical necessity of personal character and integrity; the value of human life; and the uncompromising duty to treat others with respect and compassion. No one perfectly succeeds in living out these godly values, but our parents equipped us, lovingly disciplined us and guided us.”

David went on to talk about his brother’s ability to talk, but also the way he started life as a listener, “an information sponge,” as he put it. He also said his brother was an avid reader, and like their dad, loved things that could fly:

“Like our World War II fighter pilot dad, Rush loved aviation, even as a young kid,” David said. “I lament that our dad didn’t live to fly on the various jets Rush purchased by using the very knowledge and skills he acquired from him and our mom.”

After talking more about their growing up years, David said that “Rush practiced his skills as a broadcaster while turning down the volume on the television as we watched baseball games so he could call the games himself. Later, our parents gave him a Remco Caravelle, a toy that enabled him to broadcast on the actual radio airwaves within our home. Our mom and I logged many hours listening to his first days as a disc jockey and sports announcer.”

David said that he was “struck by how much he brought our parents to life in the practice of his art — exhibiting their qualities, talents and values. Rush was blessed with the best of both. He was Rush and Millie writ large.

“Our mother was a comic, a singer, a natural ham, and an entertainer; our dad was unusually brilliant, the small college national debate champion, a lawyer’s lawyer, and the guy who would hold court in our living room to the fascination of our friends. But he never had the national platform that Rush would carve out for himself. Rush did our parents proud in a way that is indescribably gratifying to me.”

Along with telling details of his and his brother’s personal lives, the input of their parents, and the way they assisted one another along life’s journey, David attributed to his brother an incredible impact on society:

“As few others do, Rush lived life his way, and the world is immensely better because of his contributions,” David said. “He was the tip of the spear from day one and took tidal waves of abuse from hateful leftists who devoted their lives to destroying him — and they failed. Rush was responsible not for the development of modern conservatism but for its explosion into the mainstream of American life. He paved the path for so many other great conservatives. The nation — and all of us — owe him deeply for this. He single-handedly resurrected AM talk radio.”

David talked about his brother’s generosity, his love for his family, and the grief that they have felt following his death.

“Every day since he died, I steadily find myself wanting to share something with him and instantly realize I can’t and will not be able to again until we meet in heaven. That hurts.

“But I thank God for Rush’s faith in Jesus Christ and for receiving him into a much better place, one with no more death, mourning, crying or pain.

“One of the last things I said to Rush when he was still conscious and able to interact was, ‘I love you.” He looked at me and replied: “I love you, too. Big time.’

“Goodbye, big brother. Thank you for being you and for being there for me all your life. I am so, so grateful for you — and may God bless you forever and hold you in His loving arms.”