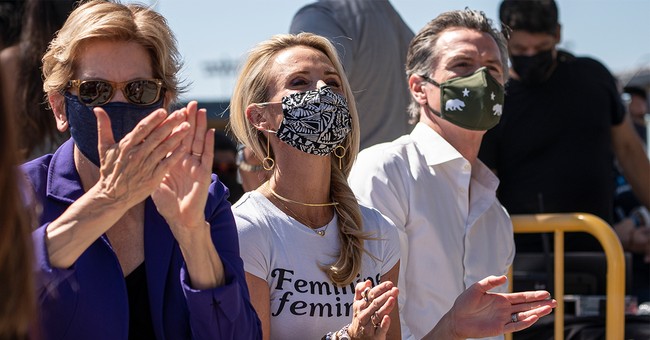 As I reported yesterday, Governor Hair Gel is flying off to Glasgow, Scotland for the United Nations Climate Change Summit, despite the fact that we have a supply-chain crisis largely due to ships carrying goods languishing in the Ports of Los Angeles and Long Beach. His Hairfulness is to blame for some of this logjam, thanks to ridiculous CARB laws that ban trucks older than 2011 from operating within the state, and AB5, which is destroying independent owner-operator truckers. The California Employment Development Department has to answer for $20 billion in unemployment fraud, and over 100,000 California citizens still have not had their claims processed.

Newsom’s last parting shot before jumping on that gas-powered, carbon emission jet across the pond, was to tell Californians to “Get a Booster” and tell parents that their child must be vaccinated in order for them to go to school and participate in activities.

King Gavin continues to feel his oats after skirting the recall, and is enjoying what he thinks is a mandate. But a certain Bay area writer feels as though his victory should not be celebrated, and expresses a bit of remorse that she voted “NO” to having him recalled.

What broke the back of this “progressive Democrat,” pray tell?

She lets you know in the San Francisco Gate:

But as a Californian and lifelong Democrat who voted against the recall, this celebration of Newsom glosses over a concerning pattern during the pandemic: He has consistently issued mandates (or failed to do so) that favor special interest groups who have donated large amounts of money to his campaigns.

What planet has this Progressive Princess lived on? Seriously?! Assemblyman Kevin Kiley, who ran to replace His Hairfulness, spoke about Newsom’s corruption to high heaven. Kiley wrote an entire book about it. RedState, KUSI News out of San Diego, California Globe, and other independents called out his corruption, hypocrisy, and sleight of hand during the pandemic and all throughout the recall campaign. From the illegal N95 mask deal with China, to keeping his wineries open while others in the state had to shut down, to not paying the property taxes on his two mansions.

In contrast, Newsom’s “homegrown team” (looking at you, San Francisco Gate), treated him and everything he did as though he were curing cancer and farting unicorns.

In August, just one month before the Recall vote, Sacramento’s ABC 10 broke a huge corruption scandal concerning Newsom, his friend and fixer Jason Kinney, and PG&E, where the governor’s inserted himself in the utility corporation’s bankruptcy settlement in order to benefit his friend’s business interests. This is the same PG&E who contributed to First Partner Jennifer Siebel Newsom’s non-profit organization–a clear conflict of interest.

Even to a casual news observer, it was right there, up front. Now that it’s corruption that this Prog Princess cannot stand, she’s suddenly twisted and outraged.

Too little, too late.

This French Laundry list of corruption didn’t cause her to bat an eyelash, but the prison guard union corruption was just beyond the pale:

This week, Newsom appealed a judge’s order to mandate COVID-19 vaccines for prison guards in California, despite the fact that in recent months, 48 outbreaks in prisons have been traced back to prison staff. There is only one possible explanation for this terrible decision to fight a vaccine mandate: The prison guards union contributed $1.5 million to help Newsom defeat the recall attempt.

Nooo… say it isn’t so! Those evil prison guards get a pass to spread COVID with impunity, all because they gave money to Gavin.

Just wait until she finds out how Newsom lied about his wildfire prevention efforts.

Then, a light bulb goes off above the Prog Princess’ head regarding the California Teachers Association’s throwing big money at Hair Gel and his allowing the union to dictate the re-opening of schools.

As the Dread Pirate Roberts said to Vizzini in The Princess Bride, “Truly, you have a dizzying intellect.”

It’s also another example of his hypocrisy during this pandemic. Not only was he caught flouting his own restrictions (the French Laundry incident), as well as sending his kids to in-person private school while refusing to mandate public schools open last year — but he has consistently allowed major campaign donors to dictate his decisions. The California Teachers Association was the single biggest lobbyist in Sacramento in the past two years — and this is arguably why Newsom refused to fight harder for schools to open last spring. This also explains why California public school staff are still not subject to a strict vaccine mandate — they are allowed to test weekly in lieu of getting vaccinated.

The Prog Princess goes on and on about what everyone who has been half-awake and paying attention already knew. We understood fully all the reasons why Newsom needed to be recalled, and so did some progressives. But, once the Kool-Aid of Elder-Trump-Evil Republicans was served up and chugged down, it was all over.

Now, at least, one of them knows they were hoodwinked. It’s probably thousands more, but they’re too embarrassed to lay bare their stupidity over legacy media.

Truth be told, this Prog Princess still loves her Dictator Newsom. She wants to see all the vaccine mandates and passport nonsense put in place, she just wants it to be equitable. What this Prog Princess is most upset about is Newsom playing favorites with his special interests, and she’s not among them. Of this you can be sure: If the Prog Princess were part of those groups that pour money into Newsom’s coffers, she would be right there among the champagne elites polishing his turds and singing his praises.

Welcome to reality, but miss me on the outrage.