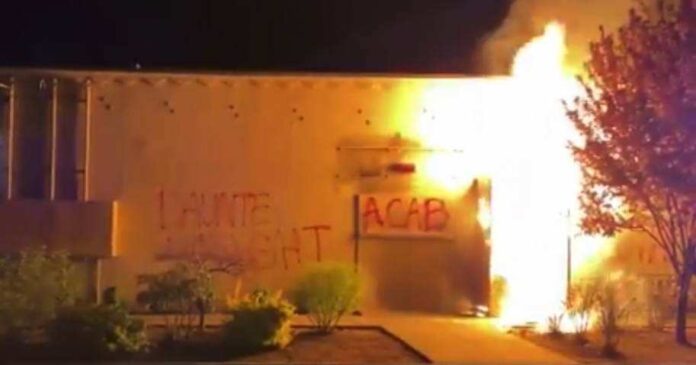 The City of Roses used to be a city of peace. Now, it has become a city that will never stop burning. The rioters are making sure of it. The rule of law means nothing to these people. The warm weather is here, so you know the vandals and rioters are going to be out in full force.

Since they know that they are no longer going to have to deal with Trump, they do whatever they want. Biden has made it abundantly clear to them: this is your country now. The far left rioters may pretend that they have peaceful motives but we know the truth.

This is pure destruction disguised as activism. We are beyond tired of it and we suspect that we are not alone in this assessment. These rioters are taking things too far now. They have set a police station on fire, with officers still inside at the time.

Portland protesters march to the Portland Police Association building, to protest the killing of Daunte Wright. Where the unoccupied building was set on fire. #Portland #PDX #Protest pic.twitter.com/mTGNvqiJTU

“Portland protesters march to the Portland Police Association building, to protest the killing of Daunte Wright. Where the unoccupied building was set on fire,” the Independent Media PDX Twitter account shared. Police arrived to direct people away from the blaze but the damage was already done.

When a concerned neighbor decided to walk towards the blaze with their garden hose, we were worried about their safety. We hope that the rioters did not set his house on fire after his brave efforts. There are not too many people who would be willing to take these types of steps, especially in the face of such harsh opposition.

This is one of our major fears. What happens when people are finally fed up with this terrorism and decide that they want to take it to the streets, too? Even worse, what happens if people are scared out of saying what they really mean? The thugs that are running the streets should not be dictating the terms of our discourse.

We wonder what the rioters said to the firefighters when they arrived. Did they screech at them and tell them that they are responsible for the furthering of white supremacy? There’s even clips of these individuals cheering on the destruction. Someone needs to ask them some very obvious questions about what they are hoping to accomplish here.

A neighbor tries to put out the fire using a garden house on the Portland police Association building pic.twitter.com/chUcwaKWRZ

They are certainly not fighting for anything worthwhile, not like this. Police buildings in Portland have been under siege for some time now and it does not look like it is going to stop anytime too soon. We are tired of seeing it and we cannot imagine how people who actually live in Portland feel.

The PPA building is on fire.
Portland Police just declared a riot. pic.twitter.com/P6Pko7A2r5

Domestic terrorists are tearing American cities apart on a constant basis. Anyone who says otherwise is called a racist but we know better. This is not a fair assessment of what is taking place. No American should ever have to look out of their window and see a police station on fire. This is what Donald Trump wanted us to avoid but Joe Biden is here to cheer them on.

We give him and Kamala a few days before they even acknowledge it. If they do, they are not going to care about the actual carnage. It will be more important to them to make sure that they are “standing with” the protesters. We will get a bunch of weak statements, full of lies about how they are seeing and hearing what these people have to say.

In the end, nothing will be done and the rest of us are going to be the ones who end up picking up all of the pieces. The peaceful protesters (and we say this with a huge smirk) get the benefit of the doubt about everything that they do, while the rest of us are left to wonder if we will ever get a fair shake again. Go ahead and burn stuff down, people. If anyone tells you not to, just tell them that they are a racist!