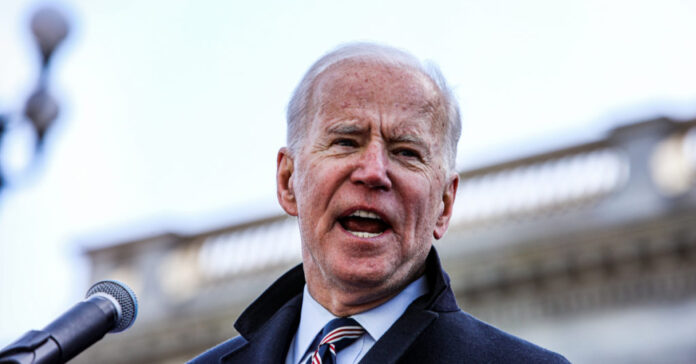 In yet another sign that he is likely slipping into senility, current President Joe Biden showed how frail and weak his mental health is becoming. While raising his weakened voice, he incessantly yelled at the crowd in Scranton, PA about the lack of support for his infrastructure plans.

While telling the tales of parents using the Free WiFi at Mc Donalds to accomplish schooling for their kids during the pandemic, he lost it. “This is the United States of America, dammit! What are we doing?” This outburst comes at a time where his plans are failing left and right, as members of his own party refuse to hop on the train to dreamland.

While he has ‘trimmed down’ his proposals from $3.5 trillion down to $1.9 trillion, the more conservative members of his party like Senators Joe Manchin (D-WV) and Kyrsten Sinema (D-AZ) are refusing to budge and say ‘yes’. This is largely due to two factors; the fluff inside the bill, and the inability of the American citizens to cover the cost. A cost he tells people is nonexistent.

His perplexing outbursts over this plan have left even some of his hardest supporters wondering if they made a mistake. Between his joke of an ‘artist’ and cocaine enthusiast son, his inability to unite Americans for anything, frequently increasing costs on goods and services, over-taxation, and his demands for the COVID vaccine…people are tired. They are tired of seeing this poor excuse of a man making up excuses for everything.

These bitter senior moments will continue for the next few years unless he is removed from office. While his VP Kamala Harris sits in the wings and waits her turn, her rhetoric and illegal political campaigning for a former Virginia Governor to return to office prove that she may be an even worse choice. In the meantime, thank God we have the House and the Senate filled with at least a few people who aren’t drinking down the liberal tea.

As Biden stumbled his way through talking about his memories of riding the trolly, he spoke of his plan’s ability to get more cars off the road by increasing the rail lines and their energy efficiency. He also touched on how coal was the backbone of Scranton, how they would need to change towards green energy and the plan would make the jobs that would pay the same kind of money.

The problem with that outlook is that it takes time to go from one to the other. It’s not like they shut off the coal plant, and the next morning the solar or wind sector is up and running with people ready to do the job. This downtime means people are (yet again) out of work while they wait for his plan to kick in. People cannot wait for something that may not come to their area.

Biden may be a Scranton boy, but he lost his ways. Maybe it’s his days in the Senate that are making him forget his past? He may be able to remember living at the end of the trolly line, but he doesn’t remember how the innovation for the trolly took time and energy. Something America is lacking, and his infrastructure plan provides nothing for.

“It does. not. increase. The debt…When you talk about the number, we shouldn’t even talk about the numbers because it’s all paid for”. These sound bites by Biden are nothing more than lip service and show just how far down the geriatric rabbit hole he has fallen. While he can still break up sentences to show emphasis on each word, he cannot formulate a real plan or even a solid one. Instead, it’s more of the empty promises the Dems are synonymous with.