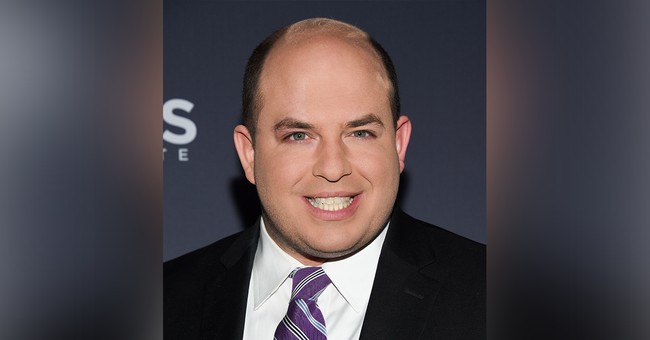 It wasn’t that long ago that CNN was falsely trying to tell you that Joe Rogan was treating his COVID-19 sickness with horse de-wormer and now a host on the same network is complaining that the right is somehow in the wrong for not believing the media.

This is, of course, right after they dedicated a segment advocating that the mainstream media should, indeed, discriminate against the right when it comes to reporting.

To give you some background, the drama started when Florida Governor Ron DeSantis appeared on Fox News and told Maria Bartiromo that the corporate media lies its head off that it’s pretty much a given at this point to not believe much of what they say.

This apparently upset the host of CNN’s ironically named “Reliable Sources,” Brian Stelter, who began ringing the alarm bell about the “GOP’s anti-media streak and made it seem as if people should be aghast that a leader of conservatives should be telling conservatives that the biased media controlled by the left lies about conservatives.

Of all the people in America, DeSantis is likely an authority on media lies seeing as how the media is constantly lying about DeSantis to America in order to make him seem like an incompetent villain.

Here’s the thing. DeSantis is correct. No one should believe the media about any given thing. It’s demonstrated time and again that it’s not a public service as it likes to present itself, but a corporate entity with ideological interests.

(READ: Remember That the Media Is a Business With a Vested Interest in Disaster, Not a Service)

One of the things that keeps this site in business is debunking the media’s lies about any given event. In fact, sites like NewsBusters are websites specifically dedicated to uncovering the media’s constant falsehoods.

Just to cover our bases, let’s take a look back at some of the lies and biased occurrences as demonstrated by the media, and just to rub our point in, we’ll focus on CNN alone.

CNN was the network that told us the recent Black Lives Matter riots were “largely peaceful” as they literally stood in front of burning cars.

They won an award for this, by the way.

Recently, Rand Paul was vindicated in his constant opposition to Dr. Anthony Fauci. Paul had been hammering the Democrat’s favorite doc on the connection between the NIH and the Wuhan lab where the COVID-19 virus was created. Fauci, of course, denied that any such connection existed and CNN was only too happy to defend Fauci against the Kentucky Senator.

What happened when Paul was proven right and the NIH admitted that funding for gain-of-function research had indeed occurred? The left went into damage control mode with CNN hosts even lining up to slander Rand Paul in arguments with his wife Kelley Paul.

CNN also seems to have a knack for anti-American positioning, and will even go so far as to sneer at America while propping up our actual enemies. For instance, CNN made a shocking report that gun crime had happened in the gun-free land of communist China. It was so shocking to CNN that it reported people thought it was yet another story of gun crime from America. It then proceeded to highlight how bad America’s gun crime problem is and borderline celebrated the full government rubber-stamping of anti-gun laws from China’s communist party. This was the same CNN that celebrated 100 years of China being under communist rule.

As mentioned earlier, CNN dedicated not just one, but multiple segments on its network to pushing the idea that Joe Rogan was taking horse dewormer for his COVID-19 symptoms. As Rogan was forced to point out, the Ivermectin he took was prescribed by a doctor and while there is a form of it meant for livestock, what he took was made for humans. Rogan was angry enough that he half-jokingly asked if he needed to sue CNN in order for them to correct their obvious lie.

But it doesn’t stop there.

Rogan had on CNN’s resident “medical expert” Sanjay Gupta on his show and effectively got Gupta to admit that CNN was spreading falsehoods and misinformation about both him and Ivermectin. After the awkwardness of Gupta having to effectively denounce the actions of his entire network when put on the spot, CNN attempted damage control by having Gupta denounce Ivermectin as meant for livestock when he was back safely in the arms of the “most trusted name in news.”

But let’s circle back to the man himself, Brian Stelter.

Stelter is one of the most egregious liars on CNN. The poster child for a left-wing stooge if ever there was one. Go ahead and go through the articles that either feature Stelter within or directly focus on him here on this site. It features a smorgasbord of BS saying BS about any given subject.

But let’s focus on his last bit of clear and present bias.

On Monday, RedState covered a moment on Stelter’s program where he gave a full platform to a guest who flat-out advocated for the mainstream media to begin openly being harder on Republicans and conservatives because, as he says, the media treating the right with the same even-handed nature it does the left is only contributing to the right’s extremism.

“I just think an objective and fact-based treatment of the news often means you can’t report something that Republicans are doing without, and suggest that this is indicative of a broad or more general problem in our politics, without being clearer somehow that it is, no, this is peculiar to Republicans, this is the nature of the Republican Party,” Stelter’s guest said.

Stelter seemed as if he was in full agreement.

Again, these are just CNN’s blunders. MSNBC, CBS, and ABC all have noted moments where they’ve acted in the interests of the Democrat Party or the left in general. CNN, however, seems to be one of the most constant and blatant offenders, even going so far as to suggest the media should cover Republicans more harshly than Democrats.

Is it any wonder that conservatives don’t trust the media?