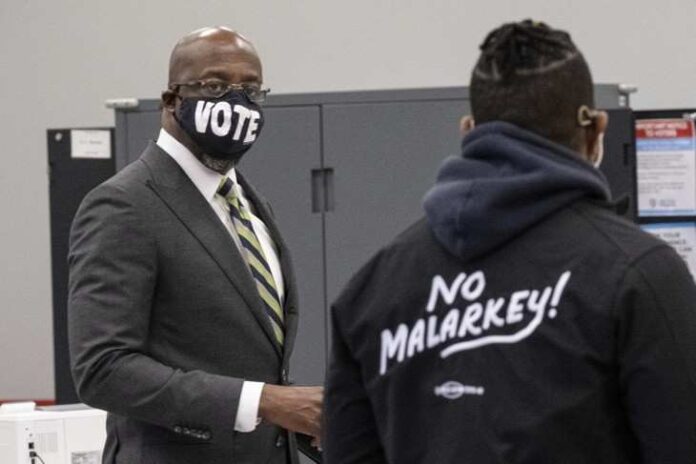 Since this law was passed, the Democrats have been on the warpath. They have decided that it is time to go on a public relations rampage and we are getting tired of it. This story serves as an insane microcosm of the awfulness that is currently going on.

There are two possibilities in this particular instance and neither of them looks all that good, from where we are sitting. The first possibility is a sad one. It’s entirely plausible that Warnock read an e-mail from an activist group, knew it was full of lies and proceeded to offer up his endorsement anyway. Good propaganda cannot go to waste. That’s the Democrat philosophy.

The other possibility is even more ridiculous. The law itself does not contain any of the language that the Democrats have tried to scare everyone with. “Modern-day Jim Crow” is one of the terms that they have been using. Warnock may not have cared about the e-mail at all. They are so worried about trying to swing everyone over to their side that they could not be bothered to fact-check.

For the intents and purposes that the Democrats have in mind, it does not matter. They get what they want, when they want. Right now, all they care about is their little misinformation campaign about the new law in Georgia. The legislative process was always going to be derided by Warnock and the other Democrats.

It’s almost like they would have done this regardless of what the new bill said! We are natural cynics but this story is sure to make even the most seasoned political observers stop dead in their tracks. When you take the time to examine the bad information that is circulating, it is easy to see why the far left has been so easy to fool. They are taking in the worst possible data on the topic.

“Sen. Raphael G. Warnock, one of two new Democratic senators representing Georgia, signed an email sent out by the advocacy group 3.14 Action after the law passed, which claimed it ended no-excuse mail voting and restricted early voting on the weekends — also early proposals that did not become law…

A Warnock campaign spokesman said the senator signed off on his statement days before the law passed, when those provisions were still under consideration,” WaPo shares.

He may have signed off before the law was passed but this is not a relevant aspect of the story. The e-mail is the real concern. This did not need to go out five days after Brian Kemp signed it. Warnock’s office is claiming that he signed off before the law was passed, not after. There are a lot of people who are going to have trouble believing this and we are chief among them.

The Washington Post has even more details that are sure to have people shaking their heads. Check out this little piece of insanity:

“Kemp and other Republicans were also furious at the Delta CEO. The company’s government affairs team and the Metro Atlanta Chamber, of which Bastian is chairman, had stayed in contact with lawmakers and Kemp’s office on the progress on the bill all along, according to the people familiar with the discussions. In an effort to punish the company, House members approved a measure to revoke a fuel-tax break that had been crafted for Delta, but the idea failed in the Senate.

“Honestly, it was a stab in the back,” said one Republican aide of the rebuke from Delta, which “blindsided” Kemp and lawmakers. The aide, who spoke on the condition of anonymity to describe private conversations, said Delta officials had conveyed their issues with some legislative proposals weeks ago, lawmakers and Kemp’s office had responded in good faith by adjusting those provisions, and the Delta people had indicated that they were satisfied.”

Delta and other companies like these are only going to continue to agitate now. Warnock is clearly worried about running afoul of them. Has corporate America taken the time to think their agitation through, however? This is the billion dollar question…