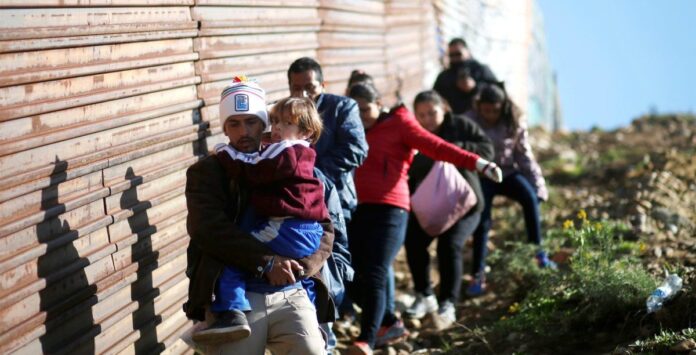 By now, the entire country knows that there’s a crisis at the southern border of the United States. The migration is breaking records as people from Mexico and Central America make their way into the country.

Joe Biden acknowledged the problem by placing Kamala Harris in charge of dealing with it all.

Here’s the problem: Kamala Harris doesn’t want to deal with it. She doesn’t see a problem with allowing migrants to enter the country illegally. She hasn’t even bothered with visiting the border to see it all for herself.

If there’s any hope of fixing the migration crisis, a solution has to be established – and it’s clearly not going to come from the vice president.

There’s no way to slow the problem as people enter the country from the southern border without federal funding for National Guardsmen – and that’s something that the Biden administration has to authorize.

Right now, federal immigration officials are overwhelmed. They’re so overwhelmed that they’re not even issuing court dates to the migrants. They’re using the honesty system that migrants will somehow decide that they’ll show up to an immigration office at some point in the future to determine if they can stay or not. And that kind of system is acceptable in the eyes of the Biden administration.

McGuire provided a truth bomb for everyone who thinks that the Biden administration is already doing all they can. Hint: they’re not.

Right now, the guardsmen are only providing to the local communities. They’re supporting local law enforcement, but that’s not where the most help is needed. The chairman explains, “We can provide resources to the local communities, but the real need is a surge back to Customs and Border Patrol, to our ICE agents, and to our immigration services.”

There are tens of thousands of people entering the border illegally each and every month. And there’s more migration in the process as caravans move through Mexico, Guatemala, and throughout Central America.

Yet, the Democrats still don’t see a problem.

Perhaps if Kamala Harris were actually to travel to the border, she’d see the problem. But, if she doesn’t travel, it allows her to stay in denial. She’s able to move forward with her plan to open the borders.

After all, why wouldn’t we want a bunch of illegal aliens entering the country? They can raise the population so that there are more representatives. They can provide more dependency on the government, too, allowing the liberals to come up with BS policies that allow them to play Robin Hood.

The reality is that Biden needs to authorize money to fix the problem – not send Kamala Harris to fix it.

The longer that he allows Harris to pretend that she’s addressing the problem is longer that the problem will exist. And it’s only going to get worse as the border patrol agents continuously get overwhelmed by the sheer numbers crossing illegally.

McGuire has identified the solution: money so that the guardsmen can be federally funded.

Now, if the Biden administration chooses not to authorize the money, it will highlight that they have no intention of fixing the problem. They’ll have to say out loud what we’ve known all along. They’re in favor of the migration and they’re in favor of watching the country collapse.