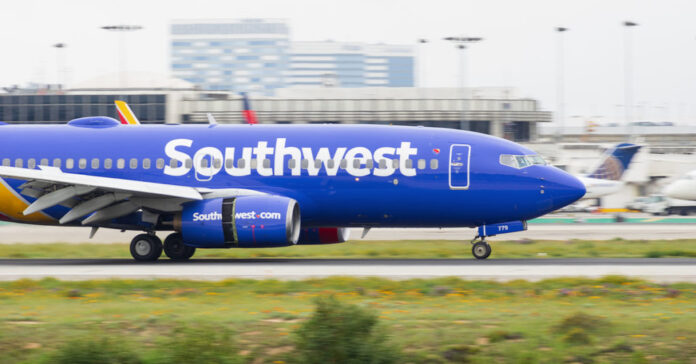 Southwest airlines workers boycotting over their vaccine mandates had no problem knowing where they wanted the blame to go. Much like many of the recently unemployed workers who were forced to choose between their jobs and their medical freedom, Southwest airlines employees know that the Biden administration is the one to twist the knife in the back of the workers who are happy to be back on the job after COVID slowdowns.

Just days ago, the airlines were forced to cancel thousands of flights just days ago due to a widespread and unofficial “sick-out” and the employees are only ramping up their notification of frustration from there. The airline has been unyielding in their assent to cooperate with the supposed executive order where President Joe Biden demanded that every company with more than 100 employees either take the vaccination or get constant and unrelenting testing (in some cases) in order to keep their good standing with the federal government.

But Monday saw Southwest’s employees by the hundreds, both current and former, gathering outside their Dallas headquarters to protest the mandate, according to a report in the Independent Journal Review. The signs being held by the workers included “Terminate the mandate,” “Freedom not force” and “No jabs for jobs,” with members stating that they were there to fight for medical freedom.

“All who believe in medical freedom are welcome to gather outside Southwest Airlines Headquarters,” a Facebook flyer for the event said. “More than anything, we want to get back to the heart of Southwest hospitality, where all employees feel welcomed, cared for, and appreciated.”

One video of the event posted to Twitter by political commentator Drew Hernandez showed the Southwest employees chanting “Let’s Go Brandon!” while standing just outside the Southwest headquarters.

The chant is part of a new rallying cry against President Joe Biden, stemming from a chant heard at a NASCAR event that was misinterpreted by a reporter. The “PG” version of a chant of frustration against the president has been accepted by family-friendly groups, including attendees at Christian universities, sporting events, and any group where explicit language is not welcome. The chant has taken on somewhat of a life of its own and stands as a reminder that even those who are sometimes unwilling to speak explicitly still feel just as strongly as those who are louder and prouder of their opinions.

Southwest employees had more than one rallying cry, however, including those who could be heard chanting, “My Body, My Choice!” mirroring those who adhere to the liberal agenda and believe that women should be able to terminate the life of their unborn children because they are being carried inside of the mother. That is a reminder that if there is bodily autonomy, no medical treatment should be forced, particularly on the healthy, and particularly if the side effect of the treatment includes “death.”

So many of Southwest’s employees have taken exception to the mandate that, according to CNBC, Southwest was forced to cancel more than 1,800 flights during the week of Oct. 9-10. The spokeswoman for the airline denied that any of the cancelations were related to the mandate, saying that it was an “unfounded rumor and speculation” that was in circulation.

The employees chanting and picking in front of the company headquarters might say differently, including Southwest Airlines pilot Chris Hill who told KDFW-TV that, “We’re already planning our lawsuits. I’m already organizing with other states. I promise you this: We will fight for you. We will do everything under our constitution.”

“This country stands for freedom, and it should mean that everywhere.”