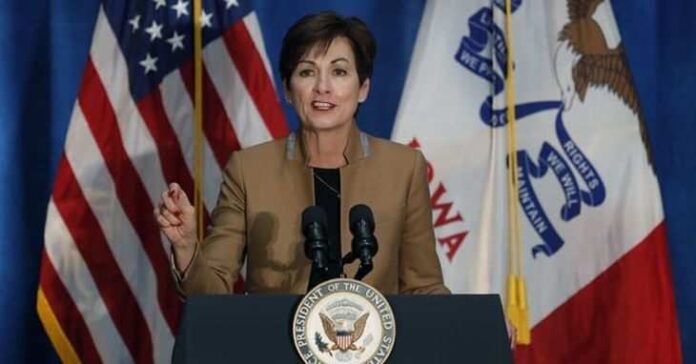 Iowa Governor Kim Reynolds received a request from the Biden administration about her willingness to house minors that are unaccompanied. As the border crisis continues to worsen, Biden is left to find solutions that are imperfect at best. The illegal immigrants are now being moved further into the country, which is a recipe for disaster.

Finally, there is someone who is willing to stand up against him and do what is right. Reynolds has laid it out for him very clearly. If Biden wants to have this problem addressed, he will need to choose someone else. She is not about to provide him with the easy out that he is desperately searching for.

Reynolds is not making this decision out of rudeness. Her reasoning is very sound. It’s not that she does not care about the children. It’s that she does not have anywhere to put them at the moment. In her mind, it is more important to help all of the Iowa residents who are in need first. She is putting America first. What a concept!

She is doubling down on this mentality in her interviews and we are happy to see it. “Reynolds told WHO radio that her priority is the health and safety of Iowans and that the state doesn’t have facilities to house migrant children for the U.S. Department of Health and Human Services.

“This is not our problem,” Reynolds said. “This is the president’s problem. He’s the one that has opened the border, and he needs to be responsible for this and he needs to stop it.”

Iowa Department of Human Services Director Kelly Garcia passed the message along to Biden on March 31. Iowa is not open for business. Now that other states are being called upon to help, Iowa’s decision has been discussed in the news more regularly.

Omaha.com has more about Biden’s desire to find new homes for all of these children. “Iowa Department of Human Services Director Kelly Garcia notified the Biden administration on March 31 that the state would not take unaccompanied minors.

“This is due to limited resources and administrative concerns. We have an obligation to take care of our children first and absent the resources or a clear and comprehensive plan for federal support, we were unable to accommodate the request,” the agency said in a statement. “We acknowledge this is an incredibly saddening and difficult situation.”

That’s the best any state can really do at the moment. No one has the ability to house thousands of immigrants on a whim. Biden may have convinced himself that they do but we know the real truth. To make matters more interesting, Reynolds may have made this decision as a way of showing her distaste for Biden’s behavior.

When Trump experienced issues like these during his tenure, he signed an executive order that provided governors with the ability to make rejections if they needed to. At the time, Reynolds was one of the governors who said yes. She did not want the refugees who needed help to be confused with asylum seekers. Refugees who are in need of help should never be referred to in this way.

Her reaction seems to be connected to the fact that Biden dismantled the system that Trump had in place. Governor Whitmer of Michigan is the one who is caving in and housing the children. There are Michigan Republicans who are less than pleased, though.

Per the Washington Examiner:

“I am appalled,” said Rep. Lisa McClain, a Michigan Republican. “President Biden’s open-border policies are encouraging parents to send their kids into our country alone. It is irresponsible and past time the president gets the situation at the border under control.”

“Mr. President, it was reported your administration was not going to send illegal immigrants north, you have now flip-flopped,” McClain said. “Can you assure us with the Michigan numbers rising that these unaccompanied minors don’t have COVID and that they have already been processed?”

As the problem continues to grow, the Biden administration had better find a solution quickly. They can only sweep things under the rug for so much longer….