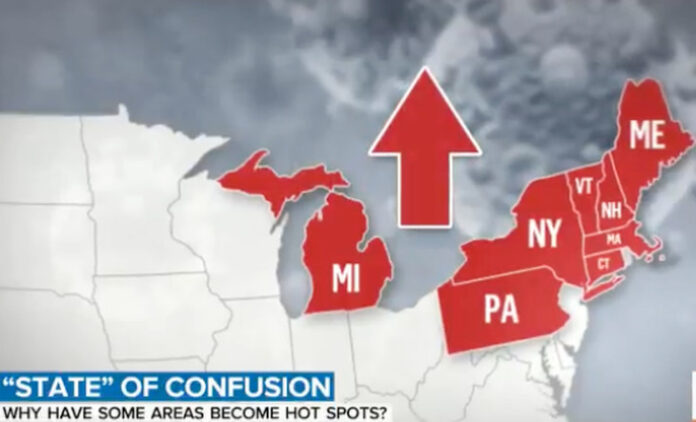 Biden’s media is grasping for information because they are confronted with a situation that defies their logic. They cannot understand why the coronavirus numbers are lower in red states than in closed-up blue states. COVID-19 has brought out the worst in people. Democratic leaders have made a mess of their states, and now they cannot understand why things are worse for everyone than before the virus hit.

Common sense has long been gone from the media playbook. Their latest attempt at journalism attempted to explain why states with the strictest rules still had spikes in their viral numbers. In their minds, their pandemic fear-based rules should have done the job, but they failed miserably.

Michigan and New York are the two areas that are having surges with the virus. But places such as Texas and Arkansas are having a good day with lowering numbers and open businesses. Greg Abbott and other Republican governors opened their states when it became evident that the socialist rules were not going to work.

Some states with stricter rules are now seeing surges in COVID-19 cases, while many others that rushed to reopen are experiencing sizable drops. The numbers have experts scratching their heads. @SamBrockNBC has the details. pic.twitter.com/2uTTgb3dxG

The problem with liberal-based media is that they may have good questions once a year, but they never come close to the truth. And when they fail to find the truth, they end up with a skewed conclusion. And in this case, they opted not to provide answers. They just left everyone with more questions.

For people that understand the logic, they can answer this question with ease. This virus has become nothing more than another version of the common cold.

The clueless media thought that the southern states were not testing as many people, but the hospitalizations were lower. That theory just does not make any sense as the evidence does not support their conclusions. Governor Abbott of Texas shows that his state levels continue to go down.

Today Texas reported a 10-month low in the number of Texans testing positive for Covid.

We reported 3 Covid-related fatalities. That’s the 2nd lowest in more than a year.

And hospitalizations decreased again to almost a 10-month low.

Once their first idea flopped, they came back and thought that the people were going to Miami and getting sick and then coming home. Their idea plays into the fake idea that Florida is the epicenter of the virus. The problem with this idea is that Miami would have higher levels than what the northern regions experience. But Miami’s levels have gone back down since spring break came to an end.

The bringing it back syndrome has opened up their third strike that the virus has mutated into another strain like what has been found in other areas of the world. But even the new strain in Florida has not spiked like it did overseas.

The mass media has no clue how to do an investigative report. They sit around their tables and speculate possibilities without ever testing their premises. They forgot the process of scientific discovery. It is not done by sitting around making statements that sound intelligently stupid.

The one thing that is coming out as accurate is that people over the age of 60 are not being infected. The credit for this success can be given to Donald Trump and the vaccine he developed for the elderly crowd.

Dr. Frederick David is the associate chair of emergency medicine at Northwell Health’s Long Island Jewish Hospital. He stated, “The cases we are seeing are the younger groups that probably aren’t eligible for vaccines just yet.” Davis has proven that commonsense does exist for some people.

It has long been known that younger people will not be as sick as the elderly when the virus hits home. Most of them are not going to see a doctor because there is nothing they can do for them.

Texas dropped their restrictions as their numbers were already on the way down. And since that time, they have not seen any spikes except in the areas where Joe Biden is letting infected illegals into the country.

The red states are opening up, and their numbers are falling as a result. The blue states are staying locked up, and their numbers are going up. Science proves that living life is the best way to get over a pandemic. It is too bad that the Democrats have not learned what it means to live free. They would be happier if they would get rid of their hate for people that are simply American.