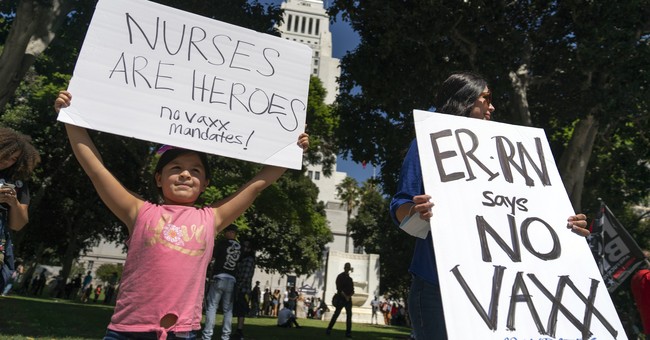 “‘Fully vaccinated’ is a term for communities or nations, not for individuals.” What the hell is that?

That is a declaration from James Hamblin, a journalist, and physician specializing in public health and preventive medicine, and a lecturer at Yale University, writing in an op-ed for The Washington Post, titled You’re not ‘fully vaccinated.’ You never will be. Any questions?

Oh, I have a hell of a lot of questions for the good doctor — but we’ll get to those later.

“Fully vaccinated.” What does it even mean?

Even the CDC recently admitted that the term is a moving target, at best. “Fully vaccinated” is not dissimilar to “climate change,” in the respect that climate alarmists — the “existential threat of our times” loons — can and do declare anything and everything is caused by climate change, as they see fit.

Hamblin began the op-ed by revisiting the death of retired Gen. Colin Powell, whose family announced his death in a brief Facebook post last Monday, saying the cause was “complications from Covid-19,” despite Powell being “fully vaccinated.” Hamblin noted that Powell had been undergoing treatment for multiple myeloma, a type of cancer that causes a breakdown of the immune system, making it capable of only producing one type of antibody.

Translation: “Fully vaccinated,” or not, Powell was most likely doomed from the start.

Hamblin said that when he read the Powell family’s statement and watched news reports of the retired general’s death, the term “fully vaccinated” stood out.

That specific phrase — “fully vaccinated” — stood out to me especially, as it featured prominently in most news coverage. It implied that Powell should have been completely protected; that he shouldn’t have been able to die from covid-19.

The use of “fully vaccinated” is not unique to Powell, either, though the coverage of his death has highlighted that the term is inappropriate in many cases, primarily because there is no consensus on what it means.

As we’ve seen throughout this pandemic, [the] precision of language and transparency in delineating the known and the unknown are key to any effective public health response.

A sense of false confidence — or of exaggerated risk — can permanently damage the credibility that is so critical to the success of the coronavirus vaccination campaign and of future ones.

Of particular concern to Hamblin and those of us who care about such things is the COVID “booster” shot; defined by Merriam-Webster as “a supplementary dose of an immunizing agent administered as an injection” and how many booster shots await us down the long and winding COVID road. (Emphasis, mine.)

At the moment, the central debate among immunologists and infectious-disease experts — in the United States, at least — pertains to booster doses. It has become clear that some people will benefit from additional shots (third doses of the mRNA vaccines and second doses of Johnson & Johnson) and equally clear that others may not.

The challenge is in determining where to draw that line. Most of us fall into a gray area between the 21-year-old Olympic decathlete in no need of more doses and the 90-year-old with emphysema who sings in an unvaccinated choir and would quite benefit from boosting.

Until 2021, “fully vaccinated” was not a standard phrase, any more than “fully married” or “fully graduated from college.” Typically a person is considered “vaccinated” or “unvaccinated.”

Technical distinctions might be used clinically to describe gray areas — a young child or a puppy, say, between doses of measles or rabies vaccines, may be considered “partially vaccinated” for purposes of logistical communications between doctors.

But such a designation would not imply that the child or puppy is protected.

Hamblin explained that earlier this year, as COVID vaccines began to become available to the public, the term “booster shot” was useful (principally to coax people into getting additional shots, of course). Now, ten months later, said Hamblin, “abundant new evidence has actually made it less clear whether our vaccine regimens should consist of one, two, or three doses.”

Needless to say, the “mainstream” media have pretty much adopted the “If one is good, two or more is better!” approach while shilling for the vaccination, including in some cases for children as young as five.

Hamblin then pointed to the “moving target” reference I made earlier in this article about the CDC.

Currently, the Centers for Disease Control and Prevention says people are fully vaccinated “2 weeks after their second dose” of Pfizer or Moderna, or “2 weeks after a single-dose vaccine” such as Johnson & Johnson.

This definition is already obsolete; as of last month, the agency also recommends third doses of the Pfizer shot for high-risk groups after six months. Soon the recommendation is expected to extend to everyone over 40.

“There is legitimate disagreement among experts, and important debate as to the prudence of such a move,” wrote Hamblin, “all part of the attempt to define “fully vaccinated.”

Hamblin used an example of a hypothetical 84-year-old with blood cancer.

If “fully vaccinated” is useful as a concept, it’s more at the level of the population than the individual. There is probably no amount of vaccine that can guarantee an 84-year-old with blood cancer is absolutely protected from covid-19 — or from anything else.

“It’s more at the level of the population than the individual.” Hamblin took the concept even further.

To be fully vaccinated might more accurately be the goal of a school or business or town or nation. And ideally, of the world. The more we lose sight of this, focusing instead on boosters and some ethereal notion of a “fully optimized individual,” the more we stand to lose, and the longer the pandemic will linger, with doses hoarded and layered on high-risk people […]. —

And a shot at “the unvaccinated,” of course: “While the unvaccinated blame the continued spread of the virus on the vaccines, rather than on themselves.”

What Hamblin fails to admit is, like the CDC, he is also moving the goalposts — attempting to precondition us for a never-ending series of booster shots if deemed “necessary” by the CDC. Moreover, that the term “fully vaccinated” never really meant anything in the first place.

Incidentally, as we reported yesterday, CNN actually said in a headline:

“People vaccinated against Covid-19 less likely to die from any cause, study finds.”

No, really — check out the hilarious article. Pure CNN.

Meanwhile, the lies continue. You in?