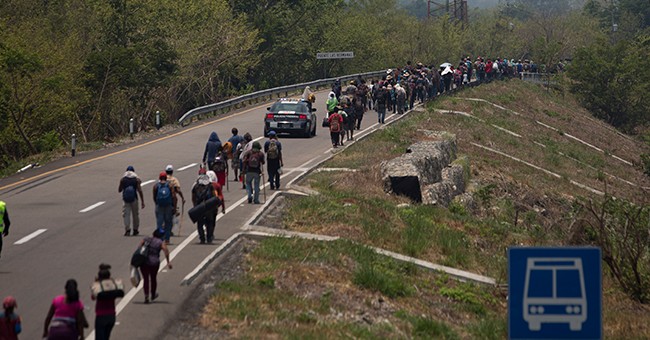 We’ve seen an incredible amount of ineptitude when it comes to the border crisis from Joe Biden and Kamala Harris.

But it would stand to reason that they don’t know how to solve the problem — even if they wanted to — if they haven’t even been to the border to really get to understand the problem. Harris had a four-hour layover visit near the border but not to the actual physical border, and then hasn’t been back.

Joe Biden drove by the border for a few minutes in 2008, and White House Press Secretary tried to sell us on his understanding of the border situation from that brief moment, as though that had any basis in reality.

Biden also said during the CNN town hall that he hasn’t had time to go to the border. Yet, he has had time to go home to Delaware over 20 weekends, including to his beach house, where they’re building fencing to protect him with our money. That sure sounds like a wall. He can have one for protection, on our dime, but we can’t. The crazy spin would be hilarious, if it wasn’t so sad that this is what we’re stuck with in charge now.

There are reports of another massive caravan of some 60,000 Haitian and Central American migrants heading to our border.

A contingent of thousands took off from Tapachula, Mexico, right over the border with Guatemala.

Some 400 Mexican forces in riot gear came out in droves to stop them, and the caravan just pushed their way right through them. This is quite something.

At some point, the Mexican National Guard just gives way, after they were reportedly getting injured.

This is what we’re going to have to deal with shortly, and if we thought the September influx in Del Rio was a lot of people pouring in, this sounds like it’s going to be more. These folks had no compunction about hurting the Mexican guard to get in.

Folks who assembled with the caravan in Tapachula actually had to register with organizers with a QR code or with a web link to participate in the trip.

As you can see, Biden’s border policy failure is also endangering Mexico, as well.