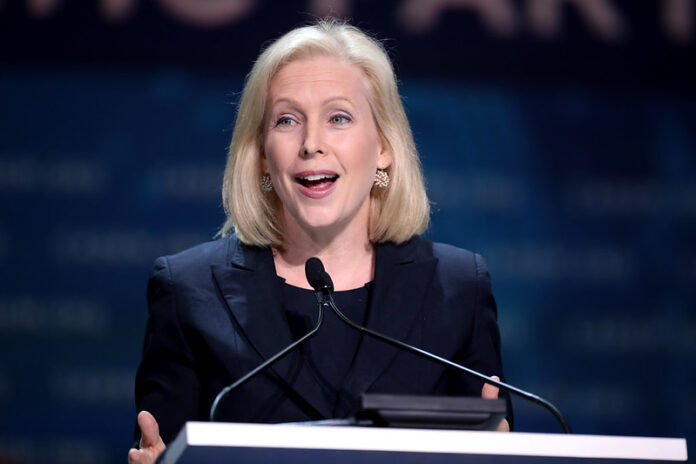 As of right now, the liberal media has led us all to believe that the infrastructure plan is designed solely to improve infrastructure across the U.S. This includes improved roads, bridges, and public transportation.

Democratic Senator Kirsten Gillibrand exposed the infrastructure plan for the pile of garbage we all knew it to be.

In an effort to defend President Biden on his multi-trillion-dollar plan, she accidentally showed off the truth.

The senator from New York sent out a tweet to explain what infrastructure is: paid leave, childcare, and caregiving.

Wait, how does that count as infrastructure?

The Democrats are starting a trend where they’ll push through one bill that costs trillions of dollars and throwing in anything and everything. It’s a way to overwhelm the American people so that they’ll see it as a good thing.

The reality is that the bills should be broken down into much smaller bills so that each one is named based on what it will cover.

The American Jobs Plan is the official title to Biden’s infrastructure package. It has a lot of provisions that have nothing to do with infrastructure, including paid family and medical leave.

Of the $2 trillion, only $600 billion is marked to go to improve roads, bridges, and public transit.

So, where’s the remaining $1.4 trillion going? After all, if this is to go to infrastructure, shouldn’t the bill stop there? The country could actually save $1.4 trillion.

But, wait…there’s also a lot of funding going to address climate change. This needs to be its own bill – not shoved into an infrastructure bill. This is the Democrats’ way of getting the funding for the New Green Deal without actually creating its own bill – mainly because the Republicans have already shot it down.

There’s also money being allocated to address “long-standing and persistent racial injustice.” Again, this needs to be its own bill. This has nothing to do with infrastructure. Further, what they really want to do is improve low-income communities. Fine, do it. But stop making it into a racial issue when there are people of all colors living in those low-income areas.

Richard Neal, the House Ways and Means chair has argued that the infrastructure bill shouldn’t be solely “physical.” He explains that the road gets you to work but the childcare gets you through the day. Therefore, childcare is a form of infrastructure as it allows families to get to work knowing that their kids are being cared for.

Neal goes on to say that “Strengthening our care economy will align closely with President Biden’s American Family Plan.”

So, yet again, Democrats are figuring out ways to spend more money to help those who are not even looking for help. They’ll redefine anything and everything so that it fits their goals. Infrastructure has to include both methods of transportation and childcare – even though only a small percentage of people are impacted by childcare.

For the average family, childcare is only necessary until the age of 5. After that, a child goes into public school systems. However, if childcare is an issue in low-income areas, that should be an issue to be dealt with through the Welfare system. It’s completely unfair to lump it into infrastructure and expect Americans to simply accept that trillions of dollars will be spent.

If Senator Gillibrand was hoping to offer some support to President Biden and prove why two trillion dollars needs to be spent, she failed. Instead, she exposed the truth that had been hidden from most Americans.

The spending and overspending by the liberals has to stop. And, someone has to call them out on lumping every bill they’ve ever wanted to pass under a single umbrella. They’re trying to pull a fast one – and Americans are catching on that the liberals are not looking out for every American, only the least advantaged.