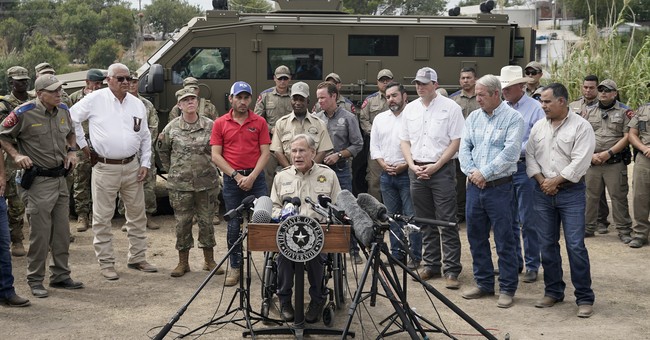 Texans don’t only proudly proclaim “Don’t mess with Texas!” — they mean it. Moreover, when you push Texans too far, they do something about it. The something, in this case — sending the Texas National Guard to a portion of the Rio Grande to keep illegal aliens the hell out of the Lone Star State.

Oh, and also continuing construction of the Trump-turned-Abbott border wall.

To kick off the festivities, three words: Biden Border Crisis(TM).

Army National Guard troops and equipment deployed by Republican Gov. Greg Abbott have moved to block a portion of the Rio Grande in Eagle Pass, Texas, as reported by Breitbart on Saturday. The Guard began arriving Friday and took up positions along a one-mile stretch of the river near the downtown area.

(Meanwhile, Joe was seen listlessly wandering around the White House halls, incoherently mumbling to himself as ice cream dripped down his chin onto his Captain America jammies top.)

The troops are stationed in Humvee vehicles carefully placed along the riverbank to serve as a deterrent to illegal crossings near the city. Nearly 30 vehicles are parked less than 150 feet from each other facing Mexico. Border Patrol agents in the area tell Breitbart Texas that more troops were scheduled to arrive later in the day.

The area surrounding the ports of entry in Eagle Pass are known as high traffic areas for illegal crossings and are problematic for the Border Patrol due to the proximity to private residences in the city.

Although many migrants choose to surrender hoping for quick release into the United States, many others, usually single adults, attempt to elude apprehension.

(Meanwhile, Clueless Joe(TM) and Circle-Back Psaki(TM) drove through town on their way to uncover “the root causes” of the Biden Border Crisis(TM). Circle-Back could be seen laughing and talking on the phone with Kamala Harris, who was at an area pastry shop sampling French croquembouche.)

A short distance away, according to Breitbart, construction crews were working to build the border wall where the National Guard blockade ends. The two-mile Texas border wall will stand 18′ tall and stretch along one of the busiest migrant crossing areas in Eagle Pass.

A source involved in the construction told Breitbart the project is progressing quickly. The source expects a state delegation to visit the construction site soon to observe the progress firsthand.

(No word if Joe and Kamala will be attending the ribbon-cutting ceremony or sending a congratulatory photo of themselves — suitable for framing, of course.)

The Texas National Guard deployment is part of Abbott’s Operation Lone Star, in conjunction with the Texas Department of Public Safety, which the Governor’s Office announced in a March press release.

The Operation integrates DPS with the Texas National Guard and deploys air, ground, marine, and tactical border security assets to high threat areas to deny Mexican Cartels and other smugglers the ability to move drugs and people into Texas.

“The crisis at our southern border continues to escalate because of Biden Administration policies that refuse to secure the border and invite illegal immigration,” said Governor Abbott.

“Texas supports legal immigration but will not be an accomplice to the open border policies that cause, rather than prevent, a humanitarian crisis in our state and endanger the lives of Texans. We will surge the resources and law enforcement personnel needed to confront this crisis.”

This decision follows a meeting last month between Governor Abbott and DPS Director Colonel Steve McCraw where they discussed strategies to enhance safety and security along the border.

(Meanwhile, Biden was in Scranton, PA, drinking whiskey sours with some random old guys at a local bar, boring the ever-loving hell out of them with some lie about an old Amtrak dude he knew.)

As noted by Breitbart, the operation has resulted in 6,799 criminal arrests, 1,195 migrant prosecution cases for criminal trespass, and more than 71,000 migrant apprehensions. The highway patrol has been involved in more than 800 pursuits since the inception of the operation.