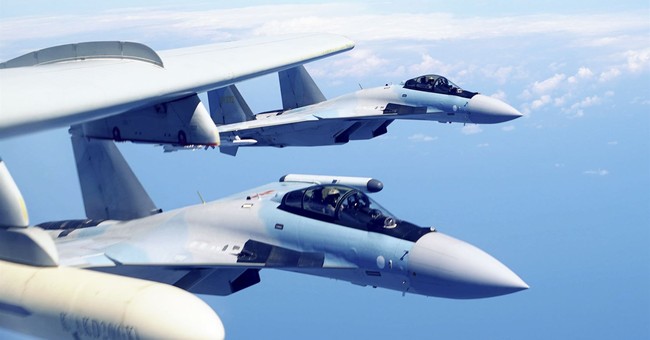 China learned months ago that they could get away with murder because Joe Biden is sitting in the Oval Office. They know that the old man will not do what Donald Trump did to keep them from torturing other countries around them. Biden owes the Chinese millions of dollars in loans he took from them before coming to the White House. His debt is a significant conflict of interest because they can leverage that money over his head to get what they want.

Biden’s weaknesses are a beacon to the rest of the world that it’s time for them to engage in terrorist and selfish activity. The Chinese have read between the lines and taken the opportunity to send their military to surround Taiwan under the guise of performing military drills.

For years the Chinese have wanted to annex back Taiwan to themselves. They see the island’s independence as afront to Chinese sovereignty. And they hate the idea that the United States has a prominent military presence on the island.

But now that Biden sits in an office, they see this as their opportunity to move in and threaten the life out the island. The only reason they are performing military operations offshore is to show their military might.

The Chinese control Biden and his criminal son. They are compromised and should not be in a position to put the rest of the country or world in danger because they do not want to take decisive action against the people they owe money to.

The media has reported that China has moved out into the sea and started conducting its military drills all the way around the island. It would be different if they would perform them on one side, but they want the world to see their military might.

The report stated very clearly that “China’s armed forces conducted simultaneous military exercises to the west and east of Taiwan on Monday in a move analysts said was a warning to the self-ruled island and its supporter, the United States.”

The red giant has sent out its might to parade its foolishness before the world. The report stated that “It was a routine training exercise organized according to the annual work plan to test the troops’ training effectiveness and beef up their capability to safeguard national sovereignty, security and development interests.”

Their “development interests” will settle on the annexation of Taiwan. The nation of China is patient and will slowly move to give them an end to what they want. They will take a moment to seize Taiwan when the world least expects it.

Another report came and tried to tell what the response of the United States was going to be. It stated that “The American military is warning that China is probably accelerating its timetable for capturing control of Taiwan, the island democracy that has been the chief source of tension between Washington and Beijing for decades and is widely seen as the most likely trigger for a potentially catastrophic U.S.-China war.”

China only moves when its enemy is weak. And right now, America is as weak as it ever has been because of Joe Biden. There is not an American alive today that believes Biden will deal with China the way he should. He owes them money, and he is in favor of what they do as a government.

The second report noted that “A military move against Taiwan, however, would be a test of U.S. support for the island that Beijing views as a breakaway province. For the Biden administration, it could present the choice of abandoning a friendly, democratic entity or risking what could become an all-out war over a cause that is not on the radar of most Americans. The United States has long pledged to help Taiwan defend itself, but it has deliberately left unclear how far it would go in response to a Chinese attack.”

Biden is old and weak and does not have a plan in place on how to deal with aggressive nations. He lied to the country when he said he has a plan. And now he sits in the White House, turning a blind eye on what his favorite country is doing to American allies.