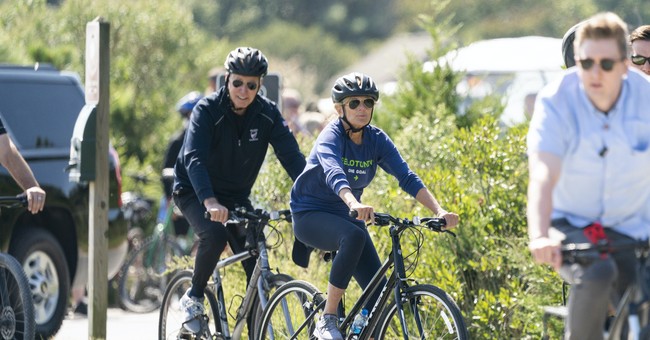 According to endless Democratic mantra, walls are racist.

Joe Biden stopped the building of President Donald Trump’s evil wall that would have further protected Americans and slowed illegal entry and drug trafficking across the border. Indeed, we were still paying out millions a day even as it wasn’t being built, as the building materials sit there, lying fallow. On July 24, as I reported, we had already paid out $2 billion not to build the wall.

Earlier this month, they canceled the contracts — in the middle of a border crisis — and this is what they are spending the money on instead.

The unspent cash that Congress allocated for wall construction will be spent on environmental projects — including “biological, cultural, and natural resource surveys” in the border region — instead, according to the statement.

So now that we’ve established what a really bad thing Joe Biden thinks this is to have a wall, we have a question for him: Why did he just spend our money to build a wall around his beach house?

According to the NY Post, Department of Homeland Security money to the tune of $456,548 — almost half a million dollars — was shelled out to a Delaware construction company to build fencing around Biden’s beach house in Rehoboth Beach. It’s listed on USAspending.gov, which tracks federal spending. The project started on September 21 and is expected to be completed by December 31.

Biden not only gets a wall, but the Secret Service has created a checkpoint to get past an intersection on the way to the home and they’ve also created “security zones” in the Lewes-Rehoboth Canal and Atlantic Ocean, not to mention frequent restrictions on the airspace in the area. I’m sure that’s not at all bothersome to the neighbors.

Meanwhile, while Biden is safe with his wall, the Border Patrol revealed that we had the highest number of people entering illegally across the southern border since 1986 — 35 years ago — with 1.7 million migrants. It’s anticipated that 400,000 will enter illegally this month. While they noted that 208,000 had been encountered by the Border Patrol entering illegally in August, they just released the numbers for September and it’s the most ever for September: 192,000.

But both Missouri and Texas are suing Biden to make him restart building the wall.

Missouri Attorney General Eric Schmitt and Texas Attorney General Ken Paxton argue that the administration’s halting of the wall’s construction when President Joe Biden took office in January redirected funds appropriated for the project, and in doing so violated the separation of powers and the Take Care clause of the Constitution. [….]

“The Biden Administration’s flat refusal to use funds that have already been set aside by Congress to build the border wall is not only illegal and unconstitutional. It’s also wrong, and it leaves states like Texas and Missouri footing the bill,” Paxton said in a statement, adding, “I will not sit idly by while this Administration wreaks more havoc on our state.”

Paxton had a special message for Joe Biden for what he did to the wall and how it’s harmed places like Texas.