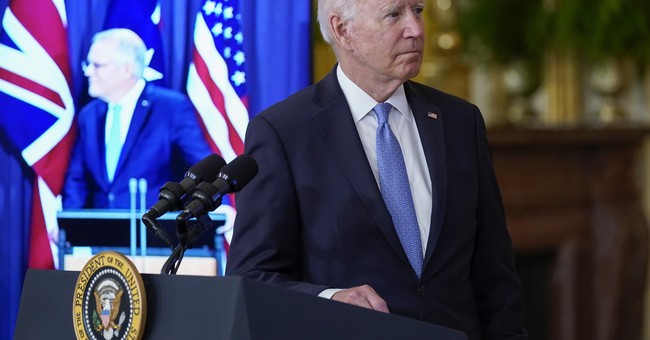 President Joe Biden is now “deeply underwater” in a new CNBC poll as inflation ties COVID-19 for the top worry among voters – a 16-point jump from the last survey and continuing a trend in bad economic polling for the President.

James Carville is the political strategist who recently said Democrats should make January 6 the focus of their talking points and try to keep the riot at the forefront of people’s minds. That’s the Carville of 2021, mind you, not the Carville of 1992, who famously posted a sign in Bill Clinton’s campaign headquarters with three key talking points.

Change vs. more of the same.
The economy, stupid
Don’t forget health care.

In particular, the phrase “The economy, stupid” stayed in the American political lexicon, and it made sense. Americans vote with their pocketbook, which is the closest local issue in their minds. Inflation, rising gas and grocery prices, and supply chain issues are worrying American voters, and the inflation issue is scaring them, according to CNBC.

Biden’s negative 11-point net rating compared with a positive 3 points in the July survey, when 48% approved and 45% disapproved.

Behind the decline is a surge in negative views of his handling of the economy, with just 40% approving and 54% disapproving, a 7-point increase from July.

A bare majority of Americans still approve his handling of the virus, but the margin narrowed considerably. Fifty percent now approve compared with 53% in July, and 45% disapprove, compared with just 38%.

The president’s numbers are declining as concerns about the economy, inflation and supply shortages rise sharply.

Inflation now ties with the coronavirus as the biggest concern for Americans, up 16 points from the prior survey. A plurality of 47% of the public believe there will be a recession in the next year, up 13 points from when the question was last asked in 2019.

Once again, this is why the Republican Party is really focusing on the local issues and why Democrats are focusing on national ones. The former wishes to convince voters that they can fix the issues voters are really feeling at home while the latter seeks to convince them that it’s passing and there are more pressing issues affecting the whole country.

With Biden continuing to stay underwater in the approval polls, and with Congressional Democrats unable to come to any agreement while the economy continues to burn, it’s clear that the Democratic Party is in trouble.

From an electoral stance, there’s still a year until the midterm elections roll around, and it’s possible (though highly unlikely at this point) that any sort of V-shaped recovery could still happen. Biden insisted last night that slow employment growth was over fear of COVID and his administration has insisted wages are going up despite no evidence for either claim. Rather, plenty of people are dropping out of the workforce and don’t really seem interested in returning right away.

Meanwhile, unions have brought ports to standstills, creating supply issues around the country. The very real threat of inflation we were warned of for a few years became reality. The Biden administration’s attacks on energy production have led to shortages and higher prices.

But the administration remains asleep at the wheel. To them, it’s not the economy so much as it’s a bunch of rich, white people finally getting squeezed. Their blinders are on to the very real financial suffering happening in the lower and middle classes. They will refuse to learn any lessons from that, by the way, and continue to maintain that it’s lack of infrastructure spending and lack of climate change legislation causing all of our woes.

And you and I will continue to suffer for their ignorance. Unless, of course, the Carville of 1992 re-emerges.