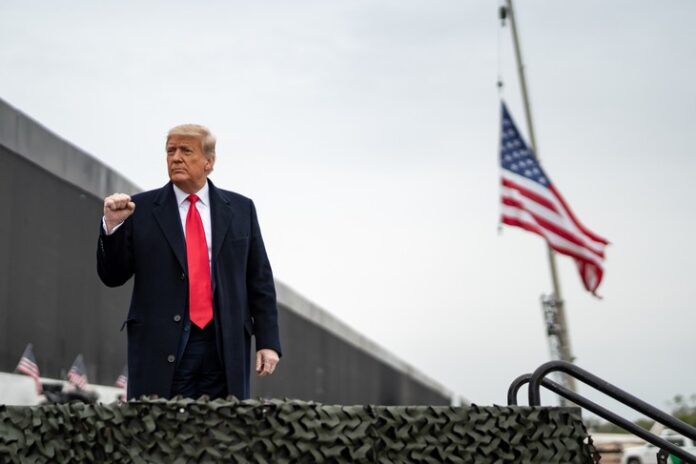 Biden made it his mission to erase Donald Trump from the history books. He sat down and executively removed the policies that Trump had fought hard to put in place without thinking things through. He erased the border infrastructure that protected Americans, and he put a stop to the building of the border wall. Those two decisions destroyed the security of the southern states.

He gave no thought to the well-being of any person as he selfishly sat down and destroyed four years of hard work from a man that loved the people instead of himself. Donald Trump worked for the people, and it showed in the way he did things. There was never a time when he did anything selfishly.

But so far, Joe Biden is as selfish as they come. The results of his hateful dismissal of Trump’s work led to the flood of illegals stacking up at the border and now in cages around the country. And Biden sits in his rocker believing that there is not a problem growing in the country.

Biden tried to get the vice president to take over the matter, but she is off playing elected queen and could not care. Since her appointed task was given, she has not been seen within a thousand miles of the border.

Biden does not have the answers in his head as to what to do. Even with his DHS Secretary Alejandro Mayorkas telling him to act, he sits idle.

Mayorkas came out and admitted that Donald Trump’s wall is the answer. He stated very clearly that “It’s not a single answer to a single question. There are different projects that the chief of the Border Patrol has presented and the acting commissioner of CBP presented to me.”

And here it comes,m the answer of a lifetime for any pride-eating Democrat to admit. He said, “The president has communicated quite clearly his decision that the emergency that triggered the devotion of DOD funds to the construction of the border wall is ended. But that leaves room to make decisions as the administration, as part of the administration, in particular areas of the wall that need renovation, particular projects that need to be finished.”

This drop the mic moment slams Biden’s rash actions and proves that he is the incompetent nutjob everyone knows him to be. Now people are wondering what in the world can be done to stop the invasion.

The gaps that Biden left are precisely where the people are trying to enter the country. There were 460 miles of the wall completed when the liberals evicted Donald Trump. That part of the border is secure. The unfinished parts are where the illegals are crossing.

Biden has tried to put other types of temporary barricades up, but they are not stopping the people. Biden will have to swallow his liberal pride and let the construction of the wall resume.

The wall was full of technology that alerted border agents that someone was trying to enter illegally. Sheriff Mark Dannels put it best when he said, “We just built roads for the cartels.”

Roads were built to facilitate the wall project. But now that Biden stopped it, all those roads are being used by the drug lords to bring their dope across.

Biden is under investigation by the GAO and his role in stopping the construction project. Many believe that the crazy man violated the Impoundment Control Act. The law states that the president cannot interfere with the money that the House allocates for specific projects. Biden stopped the wall’s construction which House-designated funds were funding. It all proves that Biden thinks of himself as a dictator who does not answer the laws.