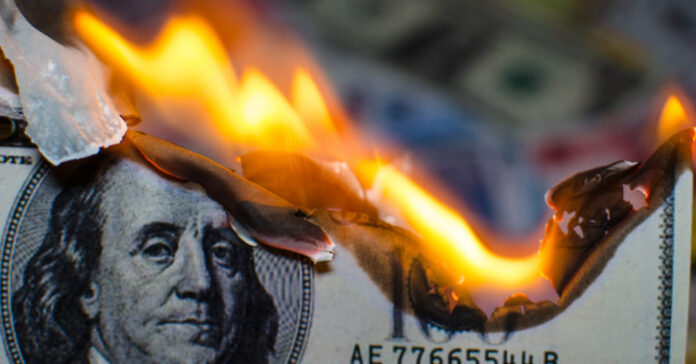 Joe Biden refuses to do the job he stole from Donald Trump. His lack of concern and trust in the American people has led him to issue policies designed to inflate the economy. And not in a good way. The price for commodities is so high that most people struggle to afford to put food on their tables.

The old man has no sense left in his head about what it takes to keep a country strong and thriving. It is bad enough that he has to put up with the progressive liberals filling his struggling mind with things that confuse him to death.

RedState has reported that “Americans now are paying on average $3.36 a gallon for fuel with expectations the costs will ascend steadily and considerably before year’s end. By comparison, one year ago exactly, when someone else was president, Americans were paying $2.26 a gallon retail.”

The price of gasoline has risen nearly 50 percent in just one year alone. And Joe Biden is the man to blame. He has cut the production of natural resources back so much that Americans have to rely on foreign oil to fuel their cars. And since there is a shipping crisis, the oil is having a hard time getting pumped off the ships and into the refineries.

Poisonous Biden made it his mission to kill the Keystone XL Pipeline deal that would have helped keep prices low for years to come. But he wanted to kill 40,000 jobs and created a need for those families following the days of a pandemic. It was his mission to make their lives worse than what the pandemic could have ever done to them.

By the start of the fourth quarter of 2021, the old president had raised gas prices to over $3 per gallon. And he is still not finished. The massive mess he has made continues to put financial stress on already hurting families. There is not an amount significant enough that the federal government can hand out that will atone for what he has done to the American people.

Joe Biden wants to continue to spend money while at the same time cutting taxpayers’ salaries. Introductory finance class 101 would educate him that his approach is all wrong. It works to increase tax revenue, new jobs must be created, and people must be paid to fill those jobs. Eliminating the jobs will only lower the amount of taxes that can be used to fund the various expenditures of the federal government.

The liberal media is also protecting the old man by ignoring the drastic increase in gas prices. They constantly reported on gas prices while Trump was in office.

But now that Joe Biden has endorsed the construction of the Russian pipeline and killed American energy, the media has gone silent because they do not want to lose their liberal sponsors that help pay all their bills.

The Democratic Party would love to see a new tax placed on every mile that Americans drive, and all that they can see is dollar signs. They miss the point that such actions will kill off prosperity and plunge the country into a recession never seen since the 1930s.

There is nothing that Biden has planned that is going to fix the gas price, and all he wants to do is milk as much money out of the country as he can before he is removed from office. The 2022 midterm elections will flow with red votes because the people who voted for Biden wish they would never have checked his name as their choice for president.