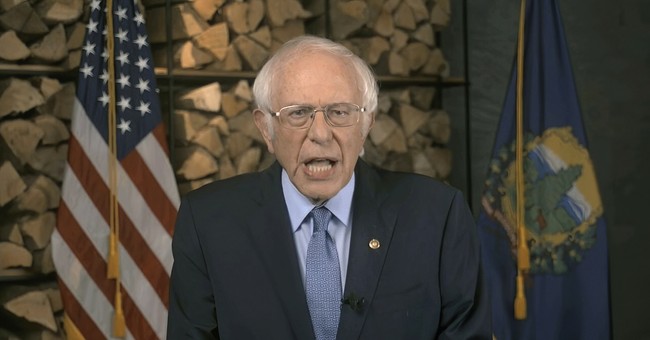 Negotiations continued today over the reconciliation bill. While its original price tag was somewhere around $3.5 trillion, that’s now clearly not going to happen, thanks to opposition from Joe Manchin and Kyrsten Sinema. Things are moving closer and closer to Manchin’s $1.5 trillion red-line, with even Joe Biden now admitting the bill will be nowhere near what the progressive wing wanted.

Still, the delusion is strong with Bernie Sanders, and he was taught a valuable lesson during a combative meeting today. Namely, that when you have no leverage, you have no say.

Sens. Joe Manchin (D-W.Va.) and Bernie Sanders (I-Vt.) squabbled behind closed doors Wednesday, with Manchin using a raised-fist goose egg to tell his colleague he can live without any of President Biden’s social spending plan, Axios has learned…

…Manchin said, “I’m comfortable with zero,” forming a “zero” with his thumb and index finger, Tester reiterated, saying he believes the West Virginia Democrat can live with himself if the Senate doesn’t pass any of the president’s $2 trillion to $3.5 trillion package.

Manchin shut down Sanders after the latter proclaimed, per Jon Tester (who was present), that “We need to do three-and-a-half.” Apparently, the socialist senator is not living on the same planet as the rest of us. There will be no $3.5 trillion deal. Those that want a massive new welfare state simply do not have the votes to make that happen. Sanders can accept that or he can end up with nothing, which is exactly what Manchin told him.

You don’t often see, or at least hear about, things getting this heated between senators. Sanders is trying to operate from a position of strength that he doesn’t hold. Manchin has the cards and he’s playing them. In the end, that means this bill is $1.5 trillion (or perhaps slightly higher).

Free college, climate provisions, etc. are gone — because they should be gone. This country is already teetering on the edge of an economic disaster. Injecting more cash into an already overheated system would be suicidal. Inflation, which is already a major issue, would launch even further out of control, leaving consumers in the dust. No amount of government hand-outs would fix that situation.

Manchin wasn’t done, though. He rubbed even more salt in the wound by letting it be known that there would not be any deal in the near future. That’s a big gut-punch to the Biden agenda, given legislation will likely grind to a halt during the coming election year.

To summarize, Manchin has now announced that he’s fine with walking away from the table with nothing. That’s a tough line to take with the White House and the progressives but a necessary one. In fact, given the state he’s from, Manchin might prefer that nothing passes. Meanwhile, Sanders seems to be content to keep walking into the buzz saw. If this drags on into next year, things are going to get even more contentious, and the chances of any bill passing drops dramatically.

And for Republicans, that’s a perfect outcome.