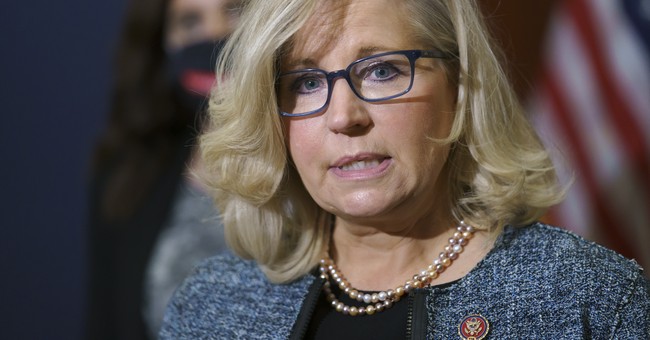 Rep. Liz Cheney (RINO-WY) claimed during the anti-Trump/Democrat Jan. 6 Committee proceedings that President Donald Trump exercising his executive privilege indicated that he was “personally involved” in planning the riot.

As we previously reported, Rep. Marjorie Taylor Greene just nuked Cheney over that, pointing out that no one cares what Cheney has to say, which is certainly true, especially when she goes all-in with the Democrats.

But Cheney’s assertion also shows that she doesn’t care about basic rights and privileges established by our system. She’s actually saying that exercising one’s rights is an indication that someone is guilty, a very upending of those rights. And she has no evidence to back this up. It also shows what a joke the committee is — a completely biased effort. Some protecting of norms there, Liz.

As my colleague Mike Miller observed, Joe Biden not fighting to protect that right is an indication, as well, of how political he is. He shouldn’t get to argue away President Donald Trump’s right.

Now, why if you are innocent would you still exercise these rights? Gee, I don’t know, maybe because we’ve seen what Democrats have done with the effort to attack Trump, actually spreading lies about Russia collusion. We know that anything, even something innocent, would be spun. The whole purpose of this isn’t truth — it’s about trying to attack Trump and keep him from running again.

But the whole argument also fails based on the information that we already know. As we previously reported, Trump requested 10,000 National Guard troops to be available for Jan. 6 two days before. Why would he do that if he were personally involved in some kind of greater organized attack? That doesn’t even make any sense. Of course, on that day, he had urged people to act peacefully.

But there’s another problem according to a story from Reuters in August, citing multiple sources with knowledge of the FBI investigation that blows up Cheney’s claim and any point to the Committee.

According to four current and former law enforcement officials, the FBI has “found scant evidence that the Jan. 6 attack on the U.S. Capitol was the result of an organized plot to overturn the presidential election result.” The FBI doesn’t believe that the riot was “centrally coordinated by far-right groups or prominent supporters of then-President Donald Trump, according to the sources, who have been either directly involved in or briefed regularly on the wide-ranging investigations.” [….]

“Ninety to ninety-five percent of these are one-off cases,” said a former senior law enforcement official with knowledge of the investigation. “Then you have five percent, maybe, of these militia groups that were more closely organized. But there was no grand scheme with Roger Stone and Alex Jones and all of these people to storm the Capitol and take hostages.”

So Cheney can spout whatever bile she wants because she hates Trump and has thrown in with the Democrats. But it only serves to prove how bankrupt she is at this point and that she doesn’t care about facts or norms.