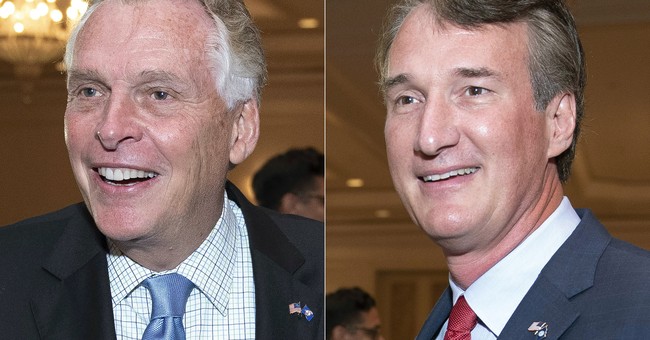 Embattled Virginia Democratic gubernatorial nominee Terry McAuliffe’s campaign has collapsed in a smoky heap, having been in a freefall since his disastrous September 28th debate with Republican nominee Glenn Youngkin and with no end in sight. It was during that now-infamous televised September debate where McAuliffe admitted that “I don’t think parents should be telling schools what they should teach.”

In a state that has become the Ground Zero of sorts over contentious issues like the implementation of CRT and “woke” gender identity standards in the public school system, the eye-opening declaration was the wrong thing to say at a critical moment in the race. And McAuliffe, in trying to have it both ways by doubling down one minute and then falsely claiming he’s been taken out of context the next, has shown himself so far to not be up to the task of defending himself and his record.

I’m pleased to report that as of today, not only has the race tightened, but now it’s at a dead heat courtesy of two polls released over the last five days, with one being from Trafalgar showing Youngkin with a one-point lead:

…and one from Monmouth just released today showing them tied at 46 percent:

As always, the devil is in the details of these things, and the details are brutal for McAuliffe:

Youngkin’s improved position comes from a widening partisan gap in voter engagement and a shift in voters’ issue priorities, particularly around schools and the pandemic.

Youngkin (46%) and McAuliffe (46%) hold identical levels of support among all registered voters. This marks a shift from prior Monmouth polls where the Democrat held a 5-point lead (48% to 43% in September and 47% to 42% in August). A range of probabilistic likely electorate models* shows a potential outcome – if the election was held today – of anywhere from a 3-point lead for McAuliffe (48% to 45%) to a 3-point lead for Youngkin (48% to 45%). This is the first time the Republican has held a lead in Monmouth polls this cycle. All prior models gave the Democrat a lead (ranging from 2 to 7 points). A traditional “cut-off” model similar to what Monmouth used in elections prior to the 2018 midterm – which includes registered voters who cast a ballot in at least 2 of the last 4 general elections and report being “certain” or “likely” to vote, or have already voted – shows a close contest with 48% for McAuliffe and 46% for Youngkin.

President Joe Biden’s already-tepid support in Virginia has dropped as well, now at 43 percent approval, down three points since August. McAuliffe announced a few days ago that Biden would be campaigning for him in the final days of the race.

The clear momentum shift in the race has led to McAuliffe’s campaign mashing the panic button, and doing really dumb things like bringing in election deniers like failed 2018 Georgia Democratic nominee Stacey Abrams as well a blow-up version of a “Trump chicken” to Youngkin’s packed rallies.

Really mature and classy. Truly a sign that the guy who months ago was considered a shoo-in for reelection feels totally comfortable and confident going down the home stretch. Not.

As I’ve said before, I’m getting vibes reminiscent of Sen. Thom Tillis’ 2014 race against then-Sen. Kay Hagan and his 2020 re-election battle against Cal Cunningham. The tide turned for Tillis in the final month of his campaigns both times and he was able to overcome being behind in the polls and was ultimately victorious.

That said, to quote legendary blogger/writer Glenn Reynolds/Instapundit, now is not the time for Virginia Republicans to “get cocky,” especially considering recent election history in the state that has favored Democrats. Fortunately, it doesn’t appear that they are. Everybody’s doing a good job of keeping their foot on the gas and not letting up on the pressure against McAuliffe, probably because they are all aware that if Virginia goes any further to the left there’s soon going to come a time when there will be no turning back and all hope will be lost.

To be sure, if elected, Youngkin wouldn’t be putting the state on solid red footing, because that is going to take more than four years. But what he would be able to do is pull it back from the brink of blue domination with at the very least a smattering of Republican policies while GOP candidates who come after him can get to work doing what they can to build off of that.

As far as I’m concerned and as a Republican in the purple state just south of Virginia who has watched in despair as Virginia has marched to the left over the last several years, that’s the best reason of all to support him.

Flashback: Terry McAuliffe Just Loses It When Asked by Virginia Sheriff if He Supports Defunding the Police