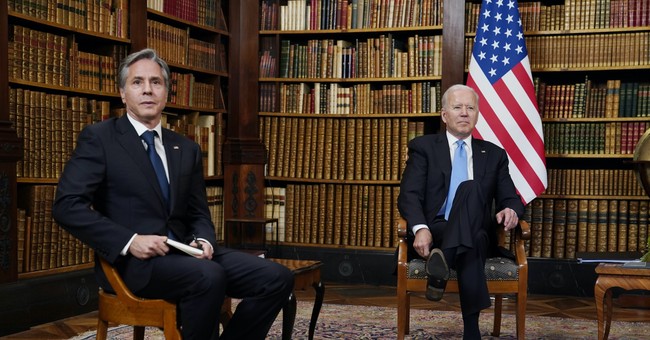 Just days ago, news broke that China had tested a next-generation hypersonic, nuclear-capable glider capable of defeating our nuclear defense system (see Chinese Military Operation Leaves US Officials Dumbfounded). The technology, deemed unnecessary by the brilliant minds at the US Pentagon, enters low orbit and then is able to approach its target from directions that conventional ballistic missiles never could.

That test left US officials confused and unable to explain how China had advanced so quickly. It also served as a reminder that we are clearly in a new cold war with China and that China is not our friend, though some still seem to be operating under that delusion. The communist nation has big plans, and none of them involve allowing the United States to remain the world’s greatest power.

So what’s the US government doing about it? Well, the State Department has an important announcement, not on how to counter China’s aggression, but on pronoun usage.

How many more “days” can we have to celebrate random social justice causes? There has to be some overlap at this point, right? And who truly celebrates any of these occasions, to the extent they are anything more than narrative-driving press releases?

I’m just struck by how tone-deaf the Biden administration continues to be. They can’t give us an update on the Americans still stuck in Afghanistan, but by golly, they are going to let us know about preferred pronouns. Are there any adults in Washington or are we being run by five-year-olds? What exactly does pronoun usage have to do with the mission of the State Department anyway? That doesn’t seem to be anywhere in their purview. They are supposed to be a diplomatic wing, helping to avoid conflict and negotiate opportunities that benefit Americans.

Instead, Antony Blinken’s outfit is obsessed with woke politics and facilitating the loss of wars. I can’t imagine what China thinks when they see this kind of stuff. They are busy building their navy, improving their weapons technology, and promoting strong, masculine qualities in their soldiers. Meanwhile, we are worried about whether someone who is a man but thinks they are a woman is called their preferred pronoun. Just a decade ago, this all would have been dismissed as parody, but it’s real life, and there are serious consequences to such a lack of focus.

We can only hope that things don’t go hot before Biden leaves office because if China were to push our buttons right now, I assume we’d only be able to deliver a strongly worded lecture on transgenderism.