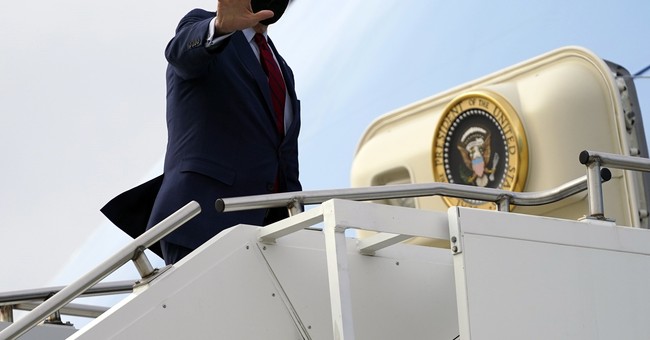 Joe Biden will demonstrate his determination to fight climate change by flying more than a dozen Cabinet members across the Atlantic next week — in several passenger jets consuming tons of fossil fuels at high altitudes.

Plus, of course, Biden’s own customized 747 Air Force One with remote-control window shades. Biden will take the four-engine goliath another 2,450 miles to Rome and back for what seems like yet another monthly G-20 meeting. And then, of course, when in Rome, the ardent abortion advocate will flaunt his Roman Catholic faith in an audience with Pope Francis, trying to snuff simmering rumors of his impending excommunication.

All this for the Democrat to show participants in the U.N.’s Climate Change Conference in Glasgow how all-in he is to save the global environment from the terrible things that other wanton humans are doing to cause and worsen global warming for their own ends. As one site called it, “a meaningless meeting of useless people.”

And, as usual, to contrast himself after the four-year presidency of you-know-who, who withdrew the United States from the Paris Climate Accords of 2015 because he said they were a waste of time and crippled the U.S. economy without forcing worse polluters like China and India to do much.

These regular U.N. conferences all over the world are single-handedly responsible not only for bloated expense accounts but also for deforesting countless acres for the paper to print their reports, addendums, appendices, and reports on the reports.

Climate change (f/k/a global warming) has been a longtime fetish of Joe Biden and his mentor Barack Obama. In June, we wrote about Joe Biden betraying our military by telling them that the greatest threat to national security was climate change, not what they spend every waking hour training for, protecting the country.

Plus the charter and government passenger jets and then limos to ferry their VIPs to and from such important events to save the planet and protect participants from TSA lines and little people with their cars.

The Paris Accords were constructed over several months and signed in, well, Paris six years ago with a much smaller U.S. delegation because the Obama crowd did not yet feel the need to top the uppity billionaire showman.

John Kerry, the failed 2004 Democrat presidential nominee, ex-senator, ex-Secretary of State, and accident-prone bicyclist, will lead the U.S, delegation in Scotland for the weeks-long conference starting Nov. 1. He is now Joe Biden’s Special Presidential Envoy for Climate after leading Obama’s talks with Iran on a nuclear pact that you-know-who also abandoned as worthless.

Additionally, flying across the Atlantic are squadrons of other retread big shots who Joe Biden found jobs for:

Also, Environmental Protection Agency Administrator Michael Regan, Energy Secretary Jennifer Granholm, a multi-millionaire who runs two homes in California and used to be governor of Michigan, Transportation Secretary Pete Buttigieg who used to be mayor of South Bend, Indiana and will interrupt his paternity leave for the junket, which he wouldn’t do for the crippling supply chain crisis.

Also, Agriculture Secretary Tom Vilsack, who had the same job for Barack Obama and used to be governor of Iowa, and Gina McCarthy, who used to be administrator of the Environmental Protection Agency but now is in the new job of White House science advisor that Joe Biden made up for her.

The titles alone would fill the cargo holds of many planes.

Vice President Kamala Harris, who did her fossil-fueled international flying to Southeast Asia in August, will remain stateside.

Of course, each of these Joe Biden VIPs has a bevy of aides and some spouses who will also be flying over to see the nearly 700-year-old Scottish city of Glasgow which, appropriately, enough means “Dear Green Place” in Celtic.

Joe Biden has been a big United Nations fan. Last summer, he even invited the U.N. to come investigate racism in the United States.

As Obama’s vice president and a former senator, Joe Biden also perfected these regular international junkets at taxpayer expense. He took son Hunter with him on Air Force Two for an official VP trip to China.

Other times Joe Biden took along grandchildren and enough aides and bodyguards to run up a $500,000 hotel bill for one night in Paris and nearly $600,000 the next night in London. That’s a lot of mini-bar, in-room movies, or something.

In Glasgow, the United States will showcase President Biden’s whole-of-government approach to tackling the climate crisis.

They will demonstrate the strength of the entire US government working in lock-step to reduce emissions and achieve our international climate commitments — and that the countries who take decisive action on climate will reap the economic and jobs benefits of the clean energy future.

The question remains, however, whether Congress, which is controlled by Joe Biden’s own Democrat Party, will get its climate of petty squabbles under control in time for Biden to deliver concrete U.S. climate commitments as well as thousands of words and planeloads of Cabinet members. And, of course, the new taxes to go with them.