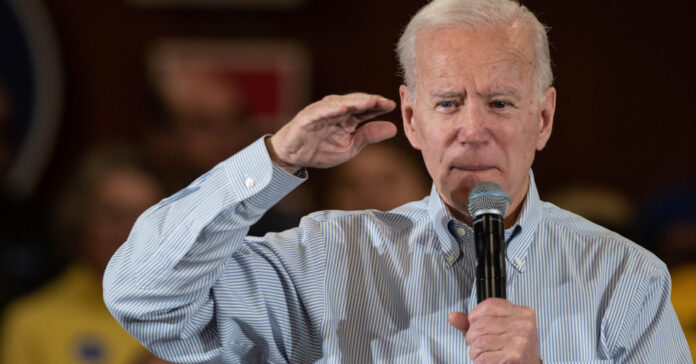 Joe Biden acts like a bit of a child when confronted with questions he is not supposed to answer. The nation is plagued with supply chain issues that started when the old man walked into the office. His refusal to address the issue has led the media and others to start asking questions about what he will do about it.

The problem is that Biden does not have a plan to take any action at all. He refuses to believe that his dirty policies have created such horrible messes. He would rather blame other people than step up and be a man and admit that he has made some mistakes. He needs to step up and take action. But he would instead turn his back and hide his face.

His refusal to answer questions from the media is nothing new, and he has long avoided answering questions because he does not have permission to provide answers to the public. But the supply chain crisis is affecting everyone in the business. And there seems to be no end in sight.

The only thing Biden could say on the issues was that “If the private sector doesn’t step up, we’re going to call them out and ask them to act.” His response is a classic way of blame-shifting the problem onto other people. Major corporations have nothing to do with federal trade policies and agreements, and they are supposed to enter into agreements without permission from the federal government. So, Biden is content to beat the cart instead of the horse.

The nutty president finished his statement and, then, took off for the door. He saw the exit sign and just had to get out of the way. He ignored all the other questions about high gas prices and the delay that mail services are having because of his regulations and misplaced priorities.

Biden started his speech of lies by admitting that he signed an executive order that affected all supply chains. He, then, went into a lengthy explanation of what a supply chain is all about. And it was clear from his speech that he had no idea what he was talking about.

Right after his bogus definition, he tried to introduce Gene Seroka and Mario Cordero and where they were from, but he messed up all of it.

His comical wording was, “I’m joined by the executive directors of the Ports of Los Angeles and Long Beach, Gene Seroka and Mari- — Mario Cordono [Cordero].  I miss- — I apologize, Mario. That the — and the president of the International Longshoremen’s Union, Willie Adams.”

These two people represent two large ports in America. And all he was trying to do was say where they were from. But he could not get his words straight because of his dementia.

He was trying to explain that they were going to increase the hours of operation so goods could get back to moving. But he provided no answers as to how increasing hours was going to make a difference. Just a year ago, there was no need to increase anything because the work got done. His sad executive order hurt the shipping industry so severely that they are forced to act like they are working on the problem.

Biden tried to justify his ignorant idea by stating that goods move faster at night because of less traffic. But that still does not deal with the problem of all the ships stuck at sea. There can be zero cars on the road, and it will not make a bit of difference because the people are not there to unload the ships. They are sitting at home making money because Biden refuses to take away their COVID financial packages.

Businesses can commit to moving more freight all they want, but if there is no one to deliver those packages, nothing will get better. And nothing can be delivered until the containers are off the ships.

At the end of Biden’s speech, it was admitted that there are so many issues because the issues needed to exist for his massive bill to be passed. He is making problems up so that he can be the hero that solves them. He could not bring himself to lead in the shadow of a great man, Donald Trump, who had the country running smoothly when he left office