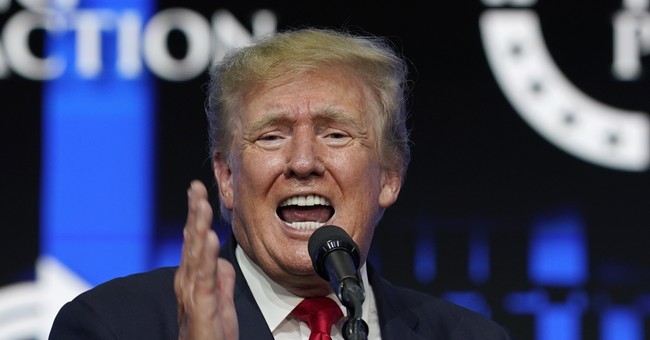 I suggested in an earlier article, titled REPORT: State Dept. IG Launches ‘Series of Investigations’ Into Biden Afghanistan Debacle, grab the popcorn and pull up a chair.

And in an article before that — both on Monday — I reported on investigative journalist Glenn Greenwald’s latest Substack column in which he lays out the “real” purpose of the Jan. 6 Committee show trial.

Former President Donald Trump has now filed a lawsuit to block the release of White House documents from his administration to Nancy Pelosi’s select congressional committee investigating the Jan. 6 breach of the U.S. Capitol. As reported by CNN, the lawsuit claims Trump still has the right to executive privilege.

Trump had previously requested that the Biden administration assert executive privilege over the documents. (The chances of that happening were somewhere between zero and minus-ten.)

As even CNN noted, similar requests from past presidents are traditionally honored by their successors, but Biden being Biden, he denied Trump’s request, citing “special circumstances.” (Perhaps when Biden becomes a former president he’ll regret his refusal of Trump’s request. Just a thought.)

Trump’s lawsuit also asserts that the Presidential Records Act is unconstitutional if it is “read so broadly as to allow an incumbent President unfettered discretion to waive the previous President’s executive privilege, mere months following an administration change.”

And, as transcribed by CNN, the lawsuit claims Biden’s refusal to protect some of the documents was “a political ploy to accommodate his partisan allies.”

Trump spokesman Taylor Budowich amplified the argument in a statement, as transcribed by The Blaze:

“The January 6th Committee is a partisan sham to distract Americans from the Democrats’ policies that are killing and robbing Americans. The media is complicit in advancing the Committee’s unconstitutionally flawed request.

White House spokesman Mike Gwin begs to differ, as noted by CNN, also in a statement:

“The former president’s actions represented a unique — and existential — threat [Democrats do love that term, don’t they?] to our democracy that can’t be swept under the rug.

“As President Biden determined, the constitutional protections of executive privilege should not be used to shield information that reflects a clear and apparent effort to subvert the Constitution itself.”

“Trump has demonstrated an ability to pressure the delay point. He’s always been good at using litigation as a weapon, and this is another one of those.”

So where does it stand? Trump has just weeks to convince the court to block the release of the documents, which appears to be an uphill battle. Via CNN:

The National Archives told Trump that it would turn over records to Congress that he wants to keep secret on November 12 — unless a court steps in, according to the former President’s lawsuit fighting the release of those documents.

The Archives said it consulted with the Justice Department and the White House, and determined the committee should receive the documents it has requested […] according to a letter from Archivist David Ferriero last week.

A copy of that letter is included as an exhibit in Trump’s lawsuit on Monday.