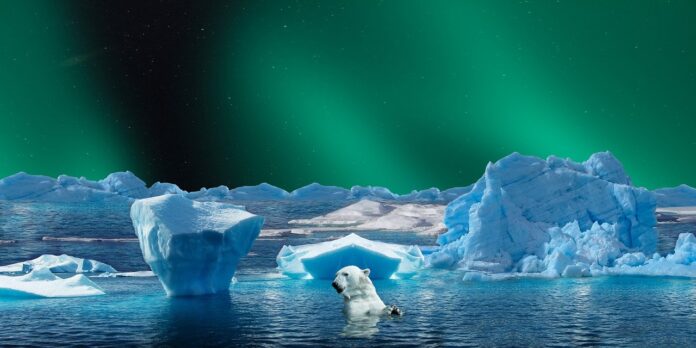 When you hear about the Arctic circle, few things likely come to mind but images of vast landscapes covered in ice and snow. Maybe a seal or two, caribou, or even an arctic fox.

So when a recent video was released on TikTok showing a large and rather heavy-duty metal fence surrounding an Arctic compound, many were confused or concerned.

As the site’s network administrator, who works and lives in the Arctic Circle, explains, the fencing is to keep polar bears off of the property and away from the unsuspecting humans living there. The administrator, whose real name is never given, describes the fence as a “polar bear cage,” but it’s not to keep the bears locked up.

Instead, he says it’s more of a prison for human occupants, keeping them locked in while the bears are locked out.

“Up here in the Arctic Circle, where I work, this is just tundra, and polar bears live here. So, sometimes when you walk outside, a polar bear could be stalking you.” The administrator says this somewhat intimidating fencing allows you to go outdoors and even see the bears without getting “eaten by a polar bear.”

Now, as you can imagine, due to the somewhat limited number of people who actually live in the Arctic most of the time, polar bear attacks are pretty rare. But they do happen.

And unlike most bears found farther south, polar bears don’t need much if any, reason to attack.

Take a recent mauling/killing in Norway’s Arctic Spitsbergen island. According to BBC News, last august, a 38-year-old man was mauled to death in his tent just outside of the city of Longyearbyen. He was in his tent minding his own business when the bear suddenly appeared out of nowhere and attacked.

There were no cubs to defend, no recent food supply or kill to claim. There was only the man in his tent, an apparent food source for the massive bear.

As the campsite owner Michelle van Dijk told NOS, the public broadcasting service for the Netherlands, the man had plenty of experience being out in the wilds of the Arctic and had managed the campsite for two years. She said, “He had done the right training and knew how everything worked there,” including what precautions to take.

But one can never be fully prepared for an angry polar bear coming at you full speed.

As is the case with most mauling incidents and human attacks, the suspect bear was tracked down and reportedly killed near a local airport not long after the unsuspecting man’s death.

Naturally, you would think that people would be somewhat happy about this, what with a proven killer bear on the prowl outside the city and all.

However, I was appalled by the reaction this incident received on social media.

Instead of feeling sympathy for the mauled man and his grieving family, many decided to defend the bear.

They said the bear was doing nothing wrong and was only reacting to what was clearly the effects of the “barely formally addressed climate change problems.”

One Twitter user stated that “It wasn’t the bear’s fault, it was their nature.”

And to some extent, that is true.

Stalking and killing prey, no matter form that may take is most certainly in a polar bear’s nature. And in the wilds of the Arctic Circle, they are pretty much at the top of the food chain. There is little they fear and little that can do to harm to them besides humans.

But that doesn’t mean we can just allow them to kill us off as they please.

Another took it even further, saying, “Well done bear for protecting your environment.” And another even admitted that “Anytime an animal kills a human I celebrate a little.”

I hope that person realizes that they themselves are human and maybe would feel differently about that situation if a polar bear was ever outside their own tent. And, as one wise commenter noted, they likely wouldn’t be siding with the bear if it had been a close family member of theirs either.

Just as it is natural for these creatures to hunt and kill, it is also natural for humans to want to protect themselves when in danger. And polar bear who has learned that humans are a source of food is most certainly a danger.

I doubt many living in the Arctic would disagree or have second thoughts about shooting a bear to protect themselves or putting up a bear fence.