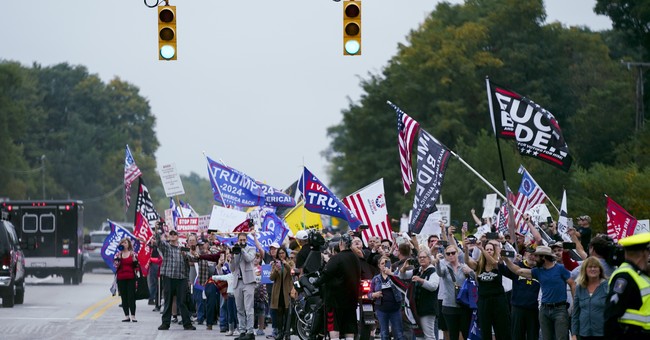 Hundreds of Boeing employees, braving the rain in Everett, Washington, came out on Saturday to protest the company’s vaccine requirement.

Boeing has imposed the requirement because, as they are federal contractors, Joe Biden has demanded as part of his vaccine mandate executive order that federal contractors comply by Dec. 8. The employees have until that date to get vaccinated or lose their jobs.

The crowd of protesters was a raucous one, not afraid to express their opinion, waving Gadsden flags and raising signs reading: “My body, my choice” and “F**k Joe Biden,” with some of them saying they would rather quit than comply.

KING 5 had some good interviews with folks who had long term connection to Boeing, and even they were ready to walk rather than be forced.

The station reported that, in some cases, they had entire families willing to quit.

“This is not the government’s place, or anybody’s place to be enforcing this on anyone,” said Bernadette Kennedy, who has five siblings who work for Boeing.

Emily Kennedy’s husband has worked for the company for 11 years. The couple is now fighting against a vaccine they don’t believe in, even if it means losing the stability of a Boeing paycheck, which supports them and their four-year-old daughter.

“I have supported him. I’m supporting him now. I will support him if he loses his job,” said Emily Kennedy.

Bernadette Kennedy said that if the company didn’t back down, they were going to lose a lot of “really good employees.”

There was a report that the employees might do “sick out Fridays” but the report was not confirmed.

While Boeing will allow exemptions due to a “disability or sincerely held religious belief,” people taking that exemption would still have to undergo “frequent testing for COVID-19” and present a negative test result when demanded.

KING 5 reached out to Boeing Friday for a comment regarding the protests. The company issued the following statement: “Boeing is committed to maintaining a safe working environment for our employees, and advancing the health and safety of our global workforce is fundamental to our values and a core priority every day.”

Translation? It sounds like a lot of employees are going to be walking, and that’s a very brave decision, when you may have been working in a job for years — and now don’t know where you may be going next.