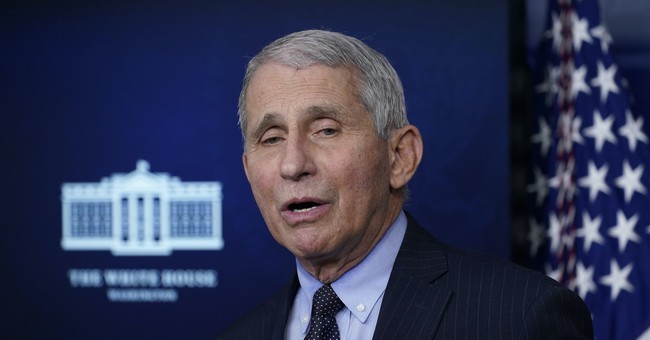 Today is Saturday and that means college football stadiums across the country (except in a few, ridiculously run states) are packed. Tailgates are happening, student sections are full, and people are enjoying the game they love.

Yet, according to Dr. Anthony Fauci, such scenes were supposed to spell certain doom. Warnings of “super spreader” events filled the airwaves, driven by the government bureaucrat, prior to the season starting.

Here’s Fauci talking to MSNBC’s Joy Reid (because who else?), agreeing that COVID was going to “feast” on the large crowds at college football stadiums. Transcript via RealClearPolitics.

“As soon as I saw that, I thought, ‘Covid is about to have a feast,'” Reid said. “What did you think?

“The same thing. People would like to say we’re done with Covid, but Covid is not done with us. And that’s really the problem, that you can’t wish it away when you have the numbers of infections that you just mentioned a moment ago,” Fauci said.

“I would hope that most of the people in that stadium were vaccinated,” he warned.

Fauci concluded: “You would imagine that when you were in a sports arena where everyone is screaming and yelling, that if, in fact, anybody, and I would be very surprised if that were not the case, if anyone in that crowd is infected, they’re spreading the virus around.”

Now, we are into mid-October and the results are in. You are going to be completely shocked to learn that Fauci’s hysteria did not pan out and that the good doctor was wrong…again.

Brewster says that all college football states in the south have reported a decline in cases since the start of the season. That includes Florida, which has seen hospitalizations fall 64% since last month, despite routinely seeing Florida fans pack The Swamp with 90,000 plus for every home game.

This is the big problem with Fauci, among many of his other flaws. He just…says things.

Often, those things are colored by politics. So when there were George Floyd protests by leftwing activists throughout the country last year, when we didn’t even have a vaccine yet, Fauci was silent. He never once went on MSNBC, CNN, or any of his other favorite outlets to talk about how dangerous those people were supposedly being. Yet, when it comes to groups of people that are perceived as right-leaning, including sports fans, Fauci suddenly finds his tongue and makes bold proclamations of doom.

Yet, those proclamations rarely pan out because again, Fauci just says things. He almost never has hard numbers to back up what he’s saying when he appears on TV. He shoots from the hip and goes with his gut, and his gut just so happens to constantly favor leftwing narratives.

In this case, it was obvious Fauci would end up missing the mark. Outdoor transmission is extremely rare, and almost all college stadiums are outdoors (Syracuse being an exception). Further, when you get into SEC country, where many of the fullest venues are, those states are over their summer waves for the most part.

Fauci didn’t care, though, when he mouthed off back in September. He was talking to Joy Reid, after all. He was there to perform, not inform. So, we can go ahead and add this to the list of things he’s gotten wrong over the last two years, and boy, is it a long list.