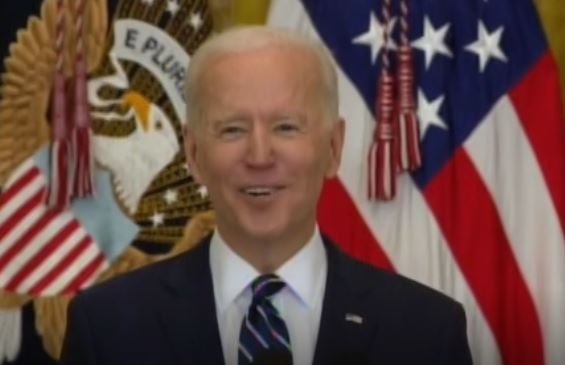 This was the commentary that he had to offer when it came to rolling back Trump immigration policies. You can tell that he is very proud of himself for this. This is one of his most coherent public statements. His dementia is barely showing here.

His dislike of Trump gives him the strength that he needs to get through the statement without stumbling and stammering. Biden was barely in office before he decided to open up the borders to any migrant children who wanted to come. This was not a wise choice but he keeps doubling down on the decision.

It’s that important for him to show everyone that he is the anti-Trump but he’s more like the Antichrist. It’s insane how he is allowing the worst things to happen to these people, while claiming that he cares deeply about protecting them. This story serves as a prime example of that.

Three children have already drowned in the Rio Grande and now stories are starting to circulate about children who have been sexually assaulted. Border Patrol official Oscar Escamilla has given a video interview to Reuters and it should leave everyone appalled. The atrocities that this man has seen should all be laid at Biden’s feet.

“About a month-and-a-half ago I was back here talking to one of the little girls, you know, and, and I told the Congressional delegation this, the same thing, right? We were gonna send her to the hospital and as I got close to her I noticed that she couldn’t speak and I asked the medical staff what happened. And she, the reason she was going to the hospital because she had gotten gang-raped. And the reason that she couldn’t speak was because she had lost her voice in the process while she was getting raped. Those things hit hard,” Escamilla says.

“WARNING: GRAPHIC SUBJECT MATTER Harrowing stories of sexual abuse are among some of what Oscar Escamilla, a U.S. Border Patrol official, says ‘hit hard’ as he details what some of the unaccompanied migrant children at the U.S.-Mexico border have told him,” Reuters shared on their Twitter account. We cannot begin to imagine the pain and sadness that these officials must feel.

WARNING: GRAPHIC SUBJECT MATTER
Harrowing stories of sexual abuse are among some of what Oscar Escamilla, a U.S. Border Patrol official, says ‘hit hard’ as he details what some of the unaccompanied migrant children at the U.S.-Mexico border have told him https://t.co/aLb7eV7Crz pic.twitter.com/QZg0Eo27Zw

The Wall Street Journal is also reporting on this story, publishing a harrowing op-ed about the border crisis. There are all sorts of awful anecdotes in here. A migrant woman had her leg broken during a scuffle with a smuggler. Coyotes threw a baby into the Rio Grande. This is what Biden is allowing because he is far too eager to try and show the world that he’s different from Trump. The only problem is that he’s right! The Wall Street Journal has more:

“Sixty-five adults and 152 children clambered aboard smugglers’ rafts to cross the Rio Grande near Roma, a border town of 10,000. One Honduran woman hobbled on board on crutches. A human trafficker had broken her leg assaulting her in Mexico, but she was determined to get to the U.S., so she paid the $3,500 coyote’s fee and struggled onto the flimsy vessel. The group also included a mother cradling her 6-month-old daughter. It was March 16, a balmy evening. Around 8:45 p.m., hell broke loose.

Border Patrol agents came on the crossing, accompanied by a Texas special-operations group. The smugglers grabbed the dark-haired baby girl and hurled her into the deep water. They capsized the rafts, sending panicked migrants flailing into the dark currents. “They did that to distract law enforcement so it would become a rescue operation,” says Lt. Christopher Olivarez, a spokesman for the Texas Department of Public Safety.”