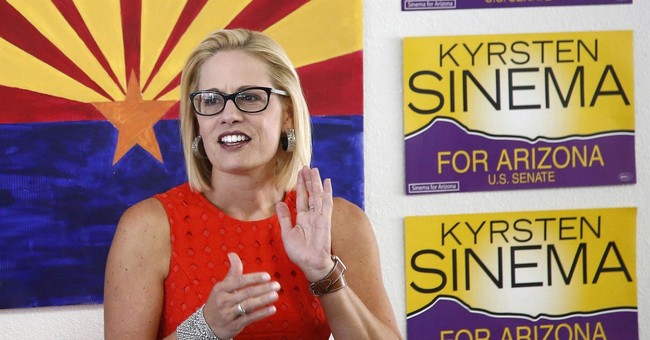 Sen. Kyrsten Sinema (D-AZ) has actually been very clear and consistent when it comes to her demands.

According to the Daily Mail, she just laid down one of her major demands before she’ll even consider a vote on the Build Back Better bill. She wants the bipartisan infrastructure bill passed first. She’s made that plain, but they just haven’t been listening. She’s said in the past that she believes it should have been voted on separately and shouldn’t have been hooked to the Build Back Better (BBB) reconciliation bill by the progressives. She’s also chastised Democratic leaders for going back on their promises to move the infrastructure bill forward.

Meanwhile, the progressives are still refusing to vote on the infrastructure bill until there’s a vote on the BBB bill.

So it’s pretty clear that whatever movement that they thought they may have made in regard to coming off the $3.5 trillion number, you still have the basic, stalemate problem in place.

In a virtual meeting, both Sinema and Sen. Joe Manchin (D-WV) said they would not stand for any more deadlines made to force votes on the package. Both also have a big issue with the huge price tag of the BBB bill. But, there’s also a problem for Biden and the bill pushers, in that while Sinema and Manchin both are objecting, they don’t have exactly the same concerns.

‘Manchin and Sinema want very different things, both in terms of revenue and programs,’ a souce [sic] close to Biden told Playbook. ‘If you just look at their currently presented red lines you wouldn’t have enough left to get this past progressives in the House and Senate. It wouldn’t raise enough money and it wouldn’t do enough big programs.’

While Manchin has suggested he would be amenable to some taxes, as we reported earlier on Thursday, Sinema is balking at that, too.

A major holdup in the ongoing talks is Sinema’s opposition to any tax increases for individuals and large corporations, per two Senate Democratic aides familiar with the matter. Her position threatens to deprive the package of over $700 billion in revenue to finance the bulk of Biden’s agenda. The president has repeatedly promised his plan will be fully paid for and won’t add to the deficit. Most Democrats are also fervent in their desire to roll back President Donald Trump’s 2017 tax cuts.

I’m not really sure how the Democrats get past this basic stalemate. It really isn’t about the money alone at this point. Sinema has made it clear she doesn’t want to be held up by leadership bending to the progressives. So, now she’s locking in on it, and she’s just going to stand tougher. Moreover, if Sinema doesn’t want any taxes raised at all, then you might as well pack it up and bury the Build Back Better bill — because it’s not happening.

Meanwhile, Sinema is in Europe and hasn’t released her schedule of where she is there and when she’s coming back. That’s going to make it hard for any activists to find her and harass her there. So, all the left can do is gnash their teeth from afar about her trip — while she gets the last laugh.