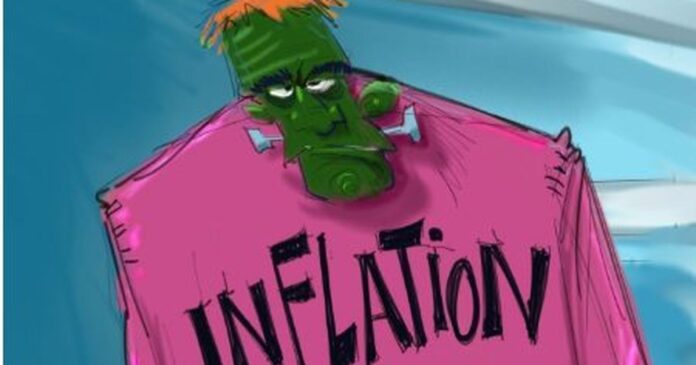 President Biden’s spokesperson has a hard job. I don’t mean Jen Psaki is asked hard questions. For the most part, the questions are akin to media T-ball. The ball is placed on the T and all she has to do is hit it. A willing cadre of White House scribes gently put the questions up for Psaki to take a whack. That’s easy. The hard part is maintaining a straight face when she says things like “inflation is decreasing after a record-breaking September”. She said:

“We’ve seen a decrease over the course of time,” she told reporters on Wednesday. “Over the second and third quarter of this year, monthly inflation increases have actually decelerated.” It’s like a drunk speeding down the highway at 150mph and when she’s pulled over, tells the cop: “What’s the problem, I was slowing down”.

The boot lickers at the Fed have called inflation “transitory” yet admitted in the same breathe that “transitory inflation” will last for quite a while. Apparently, the theory is using gentle words, as the Administration puts a shiv in consumers’ backs will lessen the pain.

Inflation is outpacing barely increasing wages. Consumers won’t call skyrocketing heating oil prices transitory. I’m guessing it will a collection of four-letter words directed at the White House, not the Fed. Make no make the White House is to blame.

My colleague Bonchie covered this administration’s idiotic class warfare spin this morning. Please take some time and read his take. The puppet master Ron Klain is telling people who are about to count pennies and worrying about how they will heat their homes this winter, that inflation is a “high class” problem. Imagine being that guy. On second thought, don’t.

Inflation’s pronouns aren’t Transitory and Tiny. Inflation is a monster – and Biden made it. He owns it.