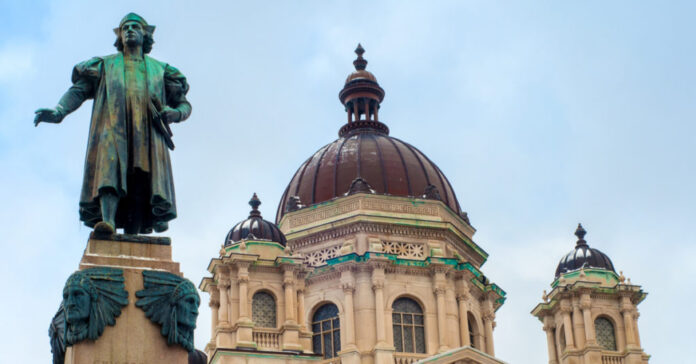 American history is under attack by liberals seeking to change it to be whatever fits their evil desire at the moment. The movement to rename historical monuments and see certain ones removed has never been more apparent. And now that they have socialism in the White House, the movement has become bold in their attempts to erase the white man from the pages of history.

America was never a white man’s paradise. The nation was founded on the principle that all people are created equal and should never be subjected to the horrors of dictator rule.

But the liberals want people to think that the Founding Fathers were all racist and hated people of color. They also want them to think that the white man stole the land from the native inhabitants that happened to roam free and engage in tribal warfare. But that could not be further from the truth.

Columbus Day was so named to help Americans remember who first landed on the new land. But liberals want to erase that truth and replace it with a native expression of racism. Columbus Day is no longer observed in more than 130 cities and continues to be under attack in many others.

But some are standing up for the truth and the correct version of American history. And in Syracuse, New York, that fight is reaching a boiling point. The people who know the town’s history will tell anyone that their connection to the monument reminds them of their Italian ancestors who came over to America and settled the area. They wanted freedom and found it in a new land.

But now, that monument is under attack by a demonic Democrat named Ben Walsh. Walsh claims to be an Independent, but his actions are socialistic. The mayor has announced that the monument of Columbus is going to come down and be destroyed.

Walsh had said that “This decision is based on the fact that we can honor our Italian American community without focusing on a statue that has become the source of division over decades and overshadowed the original intent of the monument. This space should be both a tribute to Italian Americans and a place of healing at which we celebrate our shared accomplishments.”

Walsh has bought into the poison being spread by the Democrats that some form of healing needs to take place by some people somewhere. The age-old argument that ancestors must atone for the sins of the forefathers has polluted the American landscape.

Anthony IIacqua speaks out in defense of the monument as the effort to save it is underway. He blasted the demonic mayor when he pointed out that “This monument is very much a part of our family heritage. It wasn’t put up by unknown people in the past. We know who built it. We know who sculpted it, who raised the money. We know who put it up. It’s very much our monument. We take pride in it and celebrate it every year.”

The mayor does not have the right to act as a dictator and remove things that belong to the city’s people. The celebration of Columbus Day is an age-old tradition that spans generations. And for one power-hungry creep to trash, it is typical Democratic behavior.

The mayor wants to turn the space into some all-inclusive zone that gives the liberals what they want most. They want power and will do anything to get at it, even if it means erasing American history from the landscape.

Walsh needs some reason to make the statue disappear, and so he has played the silent racist card. It is offensive to a few, so the majority will have to accept the changes. That is not living in a democracy, and it is nothing more than a limited dictatorship with Walsh at the head.