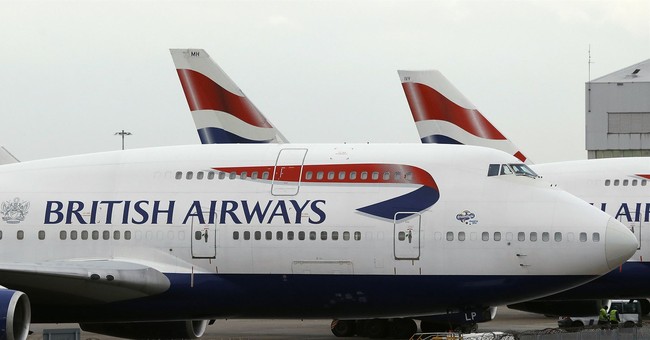 Such is news from the UK: British Airways is mopping up a mess where sex-soaked salutations are concerned.

Previously, you may have peered at your fellow passengers and assessed they were women and men.

It must’ve been the altitude: They were gender neutral, in fact — or they will be, on all future flights.

Therefore, the disinformation of dichotomy will no longer fly.

As relayed by The Telegraph, the airline “has advised pilots and cabin crew not to refer to passengers as ‘ladies and gentlemen’ in onboard announcements as the carrier celebrates the ‘diversity and inclusion’ of its customers.”

The company doesn’t make clear how 86’ing syllables constitutes “celebration,” but perhaps the term has evolved.

Personally, I’d prefer the kind of festive fun where I fly free.

Regardless, the new nothing-about-your-nethers form of travel isn’t limited to the formerly male-and-female-friendly skies.

As noted by the outlet, British Airways is following the example of enlightened airports: They, too, have banned reference to boys and girls.

Furthermore, other air services have taken the sexless approach:

German rival Lufthansa moved to a gender-neutral [greeting] earlier this year. EasyJet and Air Canada made a similar change in 2019.

Moreover, the change is “believed to have been partly driven by a change in BA customers.”

A greater proportion of families are traveling since COVID restrictions have been eased, with business travel slower to recover. The airline is understood to have been keen to make children feel included in announcements as well as respect new social norms.

Makes sense — I recall being on an airplane at eight, wondering why I wasn’t mentioned amid pre-flight information.

Whatever the actual reason, BA and other customer-conscious carriers join a growing chorus against the concept of men and women.

As I reported in July, Walt Disney World lopped “ladies and gentlemen” and bounced “boys and girls” from the introduction of its end-of-the-night spectacular:

And in the UK five months ago, there was this:

What once was a lighthearted movie line now epitomizes a potent predicament:

What should people be called, if not women and men?

I suspect we’ll soon find out.

In the meantime, all are welcome aboard British Airways — even those returning from a surgical San Francisco jaunt:

Now that the airline’s fixed its offense to post-operative persons, perhaps they’ll rename any planes that simply transport post: