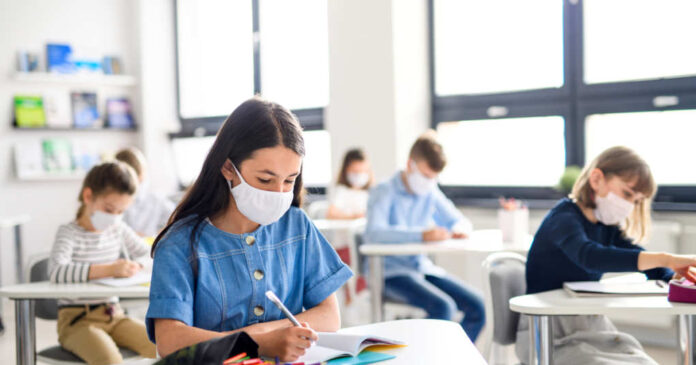 The Florida education school board had once tried to adopt Joe Biden’s illegal mandate to keep parents from making choices that are best for their kids. Biden and his liberal thugs believe that they can raise kids better than those who pay all of their bills. But Ron DeSantis stepped in and protected the legal right parents have to choose what is best for their kids. And if they decide that not wearing a mask is best, that is what will happen in the Florida public schools.

Since that time, the Florida School Board of Education reversed its stance on Biden’s mask mandates and opted to back DeSantis. And now they have the job of sanctioning eight rogue schools that have defied the executive order and robbed parents of their right to raise their kids.

The eight school boards in question make every student wear a mask at school but refuse to let parents opt their child out of the mandate. The schools in question have turned their halls into a socialist atmosphere.

The Florida Board of Education stated that the school districts being sanctioned are “Alachua, Brevard, Broward, Duval, Leon, Miami-Dade, Orange and Palm Beach counties.” These places have turned into a child’s nightmare as they refuse to let parents determine what is best for their kids.

Each school district is supposed to comply with the Florida Department of Health guidelines. They have issued rules that do not infringe on the rights of parents nor take away constitutional freedoms.

The rules also remove a tremendous burden on schools and families because they are kept in the classroom more than sent home if they get sick. The updated rules are designed to create the best environment for them to learn, and they seek to keep the child’s welfare in mind moving forward.

The emergency declaration does not take away freedoms from families. Nor do they shift the rights of the parents to the schools. Parents must have the right to make healthcare decisions for their children. For many kids wearing a mask inhibits their learning ability and causes mental harm. And the parents are going to be the ones that will know how their child is affected the best.

The rules also look at the wellbeing of kids with disabilities that thrive with teachers trained with they need to learn. The lockdowns and mask requirements keep these kids from excelling because they do not have access to the material and people they need to grow and learn.

CNN pointed out that the sanctions are seen “As a penalty, Florida Board of Education Commissioner Richard Corcoran has requested that funds for each district be withheld ‘in an amount equal to 1/12 of all school board members’ salaries,’ in addition to withholding any amount equal to federal grant funds awarded to those districts by President Joe Biden’s administration.” The liberal network tried to criminalize the governor but failed to do so.

Ron DeSantis pointed out in his latest speech that the rights of parents are going to be protected. And that means providing a place in schools for in-person learning. The mental and social side of learning is vital to the growth and development of young people, and it helps them be able to function in society.

DeSantis stated that “The idea that schools are somehow a big problem when it comes to spread of the virus has been refuted yet again. Not only is the forced quarantining of healthy children disruptive to a student’s education, but many folks in Florida are not able to work from home. With this rule, we are following a symptom-based approach to quarantining students in Florida.”

The leadership in Florida is united behind the governor. The problem the state’s problem is from a few school districts that believe they have the power to defy executive orders for the governor. Their attempts to harm kids and keep their faces covered are going to cost them a lot of resources until they do the right thing and let parents be parents.