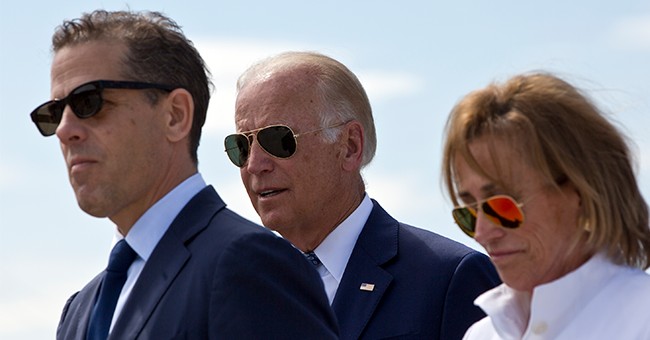 Some folks on the left are fond of saying when Hunter Biden stories drop, “Well, I didn’t vote for Hunter Biden.”

Then you know those are people who really aren’t aware of the substantial conflicts, alleged influence peddling and contacts to foreign governments that are part of the problem.

But that defense of “I didn’t vote for Hunter” might get harder yet with the latest news. Because, in a sense, you may have if you voted for Joe.

Turns out that Joe Biden and Hunter Biden shared bank accounts and paid each other’s bills. So, now that the FBI is investigating Hunter’s finances, potential money laundering and foreign business relationships, that may also ensnare Joe Biden.

According to the Daily Mail, emails from Hunter’s laptop between Hunter and Eric Schwerin, his business partner in Rosemont Seneca, show that Schwerin “was working on Joe’s taxes, discussing the father and son paying each other’s household bills, and even fielding requests for a book deal for the then-vice president, as well as managing the donation of Joe’s senate papers to the University of Delaware.”

In yet more evidence of the deep commercial relationship between Hunter’s firm and the VP’s office during Joe’s tenure, Rosemont Seneca received special favors from the White House while Joe was in office, including dozens of tickets to exclusive 1600 Pennsylvania Avenue events and private tours for Rosemont Seneca clients or associates.

And when an aide to Senator Robert Menendez requested VP Biden host the U.S.-Spain Council’s 2010 annual meeting at his official Naval Observatory residence in Washington DC, they contacted Schwerin rather than Joe’s White House office.

Hunter and Schwerin then privately discussed the potential to ingratiate themselves with ‘CEOs of the major banks’ if they helped arrange the request.

Then if Hunter was paying Joe’s bills as the emails suggest, then Joe was personally benefiting from Hunter’s business. Hunter said in one of his emails that “half” of his salary went to his father.

In a 2019 text to his daughter Naomi, he wrote: ‘I hope you all can do what I did and pay for everything for this entire family for 30 years.

‘It’s really hard. But don’t worry, unlike Pop [Joe], I won’t make you give me half your salary.’

Bills Hunter paid for Joe included a $190-a-month AT&T phone bill and thousands in repairs on the president’s lakeside home in Wilmington.

In a 2018 email to one of his own assistants, Hunter complained that he had been shut out of his own bank account and that his father had been using it.

‘Too many cooks in the kitchen. Too many profile changes and such. Happened 10 days ago too…

‘My dad has been using most lines on this account which I’ve through the gracious offerings of Eric have paid for past 11 years,’ he said.

Schwerin was constantly referring to paying Joe’s bills, saying that Joe had “contacted” him about Joe’s mortgage. He even referred to doing Joe’s taxes and getting his tax refund check.

On April 9, 2010, Schwerin wrote to Hunter: ‘I was dealing all afternoon with JRB’s taxes (but solved a big issue – so it was all worth it).’

On June 10 that year, he wrote: ‘Your Dad’s Delaware tax refund check came today. I am depositing it in his account and writing a check in that amount back to you since he owes it to you. Don’t think I need to run it by him, but if you want to go ahead. If not, I will deposit tomorrow.’

Schwerin also spoke about Jill Biden’s taxes. The family referred to her as “Mom-Mom.”

‘FYI, we have a bill for approx. $800 from Bill Morgan for all the work he did for Mom-Mom on her taxes, household help, etc,’ Schwerin wrote to Hunter.

‘Who should pay the bill? Do you and Beau want to split it? Should I ask [Joe’s sister] Val, [sister-in-law] Sara or your Dad? I’d like to get it paid sooner rather than later.’

So Hunter’s business partner was apparently intimately involved in Joe’s finances, even the family’s finances. Why are Hunter or other members of the family paying for Joe’s bills, even Jill’s tax preparation? Was Joe not capable of dealing with his own finances? What was really going on here?

Schwerin was involved in fielding new book proposals for Joe and giving his Senate papers to the University of Delaware. Schwerin was even contacted by Danny O’Brien, then chief of staff to U.S.-Spain Council chair Senator Menendez, contacted Schwerin asking if Vice President Biden could host the group’s annual meeting at the VP residence.

Schwerin wrote to Hunter about the opportunity that posed to connect them with potential future clients.

‘Spanish members include CEOs of the major banks – Banco Santander, etc, Iberdrola, Spanish Rail, etc. Amb. Solomont is a big supporter and JRB [Joe] went to speak to group in Boca when a Senator,’ he said.

‘Having their annual meeting in DC in July. Spanish Foreign Minister attends. Danny wants to explore with you possibility of getting VP to host event at NAVOBs [Naval Observatory] for group. Maybe even an appearance at a reception at a hotel. I’ll get more info and we can discuss with Danny next week. I think Solomont mentioned your interest in Spain and that is why Danny is calling us.’

That sure sounds like they wanted to use that connection help their interests. That wasn’t the only time. Rosemont Seneca got dozens of tickets to White House events, which they then used to entice potential business clients.

Perhaps one of the most disturbing emails suggested money for a Russian hooker — with whom Hunter had a big bender and paid $25,000 to — might have been connected to Joe’s account.

On May 24, 2018, a recently retired senior Secret Service officer, Robert Savage, texted Hunter warning he would ‘have to assume you are in danger’ and commandeer keys to the room if he didn’t come out of his $470-per-night suite at The Jeremy Hotel in Los Angeles where he had been holed up with a Russian hooker to whom he wired $25,000.

The agent added: ‘Come on H this is linked to Celtic’s account’ – the Secret Service code name for Joe Biden. ‘DC is calling me every 10. Let me up or come down. I can’t help if you don’t let me H.’

It is unclear whether the agent’s reference to ‘Celtic’s account’ was about charges for prostitutes on a Joe Biden bank account, or his employment by Joe Biden to monitor his son.

The Daily Mail spoke with John Cassara, a former U.S. Intelligence Officer and Treasury Special Agent who is an expert in money laundering investigations. Cassara said the public information available was “very worrisome particularly in the areas of corruption” and that if Joe didn’t occupy the office he holds, a prosecutor would likely be looking into him.

There’s a lot swirling around here, but one thing’s for sure — Joe Biden was full-on lying when he claimed that he had no contact with his son’s business. Indeed, not only was Hunter’s business partner involved with Joe, Hunter’s work may have had a part in personally supporting him.