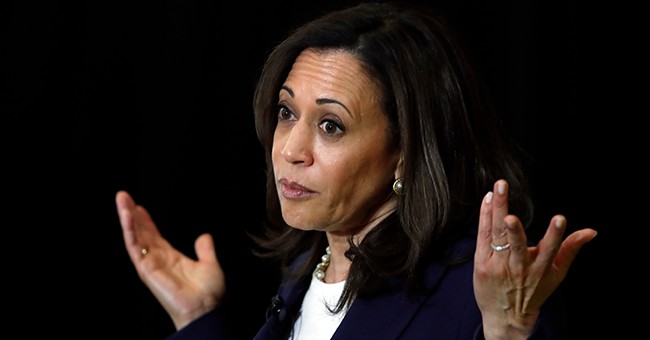 Vice President Kamala Harris has been in crisis mode since Day One of her time as President Biden’s second in command, and nine months in things just keep getting worse with no end in sight.

When last we left you, “border czar” Harris was getting called out for making a pit stop at a New Jersey bakery on Friday as other senior Biden administration officials were visiting Mexico for a critical meeting with Mexico’s President Andres Manuel Lopez Obrador to discuss a new accord that would “combat drug trafficking, fentanyl smuggling, money laundering and illegal immigration” at the border, as reported by the New York Post.

In addition to that, Harris has also been widely mocked for a bizarre video that was released last week which showed her in front of young children and putting on a performance talking excitedly about space and science that made her sound more like an animated side character from a Disney movie than it did the VPOTUS. More embarrassing was the revelation today that some of the children in the clip were actually child actors who auditioned for their spots in the video.

During his program tonight on Fox News, host Tucker Carlson brought on conservative commentator Candace Owens to discuss the video and what it really said about Harris. They both touched on the fact that it showed how desperate the White House was to make her look authentic (a point my colleague Bonchie made well in his write-up earlier) despite the fact that everything about her public appearances and speeches looks staged. But Owens zeroed in on something else that I think gets to the heart of why Harris never looks comfortable when she appears in public on behalf of the administration: She hates her job and does not want to be the Vice President.

“To me personally when I watch her, I wonder whether or not … does she even want to be Vice President?” Owens asked rhetorically. “I think that’s a question that’s on a lot of Americans’ minds when it comes to her, because every time you see her she just seems so phony. It seems like she’s playing a part that she genuinely doesn’t want to play.”

Owens then opined that though it seemed like it would be hard for Democrats to put forth someone more unbearable and unlikeable than Hillary Clinton on the national stage, they managed to do it with Kamala Harris.

Watch Carlson’s and Owens’ exchange below:

I think there is a lot of truth to this argument, especially when you consider that Kamala Harris enjoys being the center of attention and in front of the flashing lights and cameras, not playing second fiddle to anyone. Not that there’s anything necessarily wrong with that, but when you’re picked to be someone’s Vice Presidential running mate you have to console yourself with the fact that you will always be second fiddle unless, God forbid, something happen to the President. If you can’t then you have no business even considering the offer.

Al Gore, Dick Cheney, Joe Biden, and Mike Pence all seemed to relish and appeared quite comfortable in their roles as VP attack dogs even though Gore and Biden, like Harris is rumored to be, had higher ambitions. Harris hasn’t seemed comfortable with the situation since she was announced as Biden’s pick, and that hasn’t changed at all through the entire time she has actually served in the role.

Harris’ inability to come off as authentic and genuinely happy with her job also stems in the part from the fact that a lot of her political life has been scripted and at times gifted to her, if you’ll recall back to the days of her affair with married California Democrat mover and shaker Willie Brown and the doors that “relationship” opened by Brown’s own admission.

And in a way, the offer of the Vice Presidency was gifted to her as well after wokesters in the Democratic party hounded Joe Biden to pick a woman of color for his running mate, giving him no choice but to pick from among others the likes of Stacey Abrams and Susan Rice, the former who was a little too eager and inexperienced while the other would have lent credence to the rumors that Biden was preparing to make his time in office the third term of the Obama presidency.

Biden was applauded at the time for choosing Harris, considering they were bitter rivals for a time during the primary campaign season. But clearly whatever luster was there for Harris in Biden’s eyes has worn off, as during an August event celebrating women’s achievements while welcoming the female NBA champions to the White House, Biden literally could not name one reason why he picked her to be his running mate:

When your own boss can’t even recall what it was about you that made you stand out from all the rest, that sort of says it all, doesn’t it?