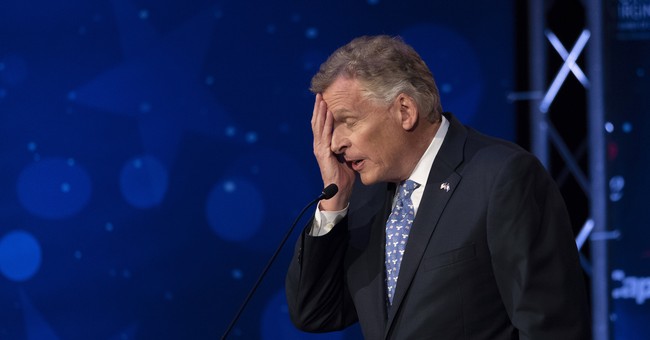 We’ve previously reported on how Democrat Virginia gubernatorial nominee Terry McAuliffe’s campaign is imploding so badly that some Democrats in the state are predictably trying to make some sneaky last-minute changes to the way absentee ballots are processed, apparently in hopes that they’ll help drag McAuliffe over the finish line in the event the voting goes down to the wire.

Over the weekend, McAuliffe made matters even worse for himself during a CNN interview in which he again insulted Virginia voters on the issue of parental input in their children’s education as well as on the controversial topic of implementing Critical Race Theory in public school classrooms, suggesting parents were racist and that their input on the education system should be confined to electing school board members.

But he also did something else during his Sunday interview that raised eyebrows, including those of some CNN anchors who made sure to call him out on it both during the interview and in a later broadcast.

Watch below as CNN State of the Union co-anchor Dana Bash chides McAuliffe for mentioning the name “Trump” numerous times:

This morning on CNN’s “Inside Politics” program, anchor John King pointed out with receipts that during the 13-minute interview McAuliffe did with Bash, he mentioned Trump’s name a total of 18 times:

Both King and Bash seemed annoyed at McAuliffe for doing so. After all, bashing Trump 24-7 is supposed to be their jobs, not his!

But seriously, at the very end of that clip you saw one of the panelists note that McAuliffe’s strategy “hasn’t really worked so far,” and he’s right. It hasn’t.

Instead of Trump potentially hampering Republican nominee Glenn Youngkin’s campaign in the purple/blue state of Virginia as McAuliffe would like to see happen, McAuliffe himself has emerged as his own worst enemy in the closing weeks of this race, with Youngkin surging in the two polls taken since McAuliffe’s terrible debate performance from a couple of weeks ago.

Last Wednesday, new polling numbers out from Emerson showed Youngkin had narrowed the gap with McAuliffe from four points in a September Emerson poll to one point in their most recent poll.

And just today, new polling numbers from Christopher Newport University show Youngkin has narrowed the gap in their polling from nine points in an August poll to four points in today’s poll, the latter of which is within the margin of error.

McAuliffe was also recently caught admitting that President Joe Biden was not popular in the state, which is also a drag on his campaign.

As I’ve said before, though all of this is good news, now is not the time for Virginia Republicans to – as Glenn Reynolds/Instapundit would say – “get cocky.” Keep your foot on the gas and do not let up on the pressure against McAuliffe. Because if Virginia goes any further to the left there’s soon going to come a time when there will be no turning back and all hope will be lost.

To see all polling data to date for this race, click here and here.

Flashback: Terry McAuliffe Just Loses It When Asked by Virginia Sheriff if He Supports Defunding the Police