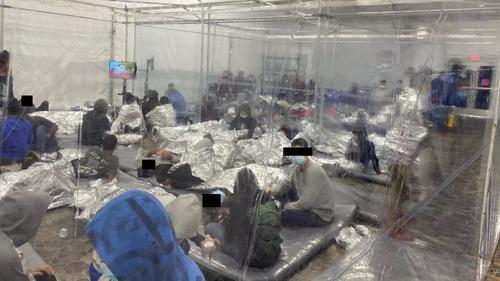 The Democrats have been crying to anyone who will listen about “kids in cages” for some time now. Anyone who knows their real M.O. is well aware of the truth. They could not care less about children being detained because it is the furthest thing from their thought process.

The Trump administration is said to be the first to have “put kids in cages” but that’s already been proven false. Biden, in his oh-so infinite wisdom, is waiving FBI background checks, ensuring that this situation becomes far, far worse before it has a chance to get better.

That’s all he cares about at this point. If we didn’t know any better, we would assume that Biden actually wants things to get worse. That’s how foolish all of his decisions have been. The crisis continues to escalate and he keeps doing things that are sure to exacerbate it.

If this is how he’s going to prove that he is better than Trump, he’d better try a whole lot harder. This is only going to prove Trump’s point. He wanted to keep the borders safe and in a very childish display, Biden is looking to undo everything that he has already accomplished. It’s taking him no time at all, either.

“In the rush to get children out of overcrowded and often unsuitable Border Patrol sites, President Joe Biden’s team is turning to a measure used by previous administrations: tent camps, convention centers and other huge facilities operated by private contractors and funded by the U.S. Health and Human Services. In March alone, the Biden administration announced it will open eight new emergency sites across the Southwest adding 15,000 new beds, more than doubling the size of its existing system,” the Associated Press reports.

In addition to this disconcerting information, the report went on to share a bit more. The AP says that “these emergency sites don’t have to be licensed by state authorities or provide the same services as permanent HHS facilities. They also cost far more, an estimated $775 per child per day.” That’s an insane amount to be spending at this point.

Biden acts as if we have some sort of Scrooge McDuck vault that he can swim around in at his leisure. The report has more and anyone who is truly concerned about the future of this country is going to want to read on and learn more about what is going down as we speak.

“And to staff the sites quickly, the Biden administration has waived vetting procedures intended to protect minors from potential harm,” the report continues. “Staff and volunteers directly caring for children at new emergency sites don’t have to undergo FBI fingerprint checks, which use criminal databases not accessible to the public and can overcome someone changing their name or using a false identity.”

Meanwhile, the HHS is trying its best to do its own damage control, issuing various statements about what is currently taking place. The potential staff is said to still have to pass “public record criminal background checks,” but as we know, this will depend on the level of honesty that the applicant is comfortable with. It’s sad that we even have to say these things but this is where things have gone.

Everything is a mess and stuff has gotten totally out of hand. It probably wouldn’t bother us as much if Biden had been willing to simply let the status quo remain the same. “While the various background checks could identify some past criminal convictions or sexual offenses, these checks were not as extensive as the FBI fingerprint background checks,” said the HHS inspector general previously.

This is a major blunder from an administration that has already had plenty of them. In their rush to make the borders more “friendly”, they have failed to realize that they are opening up Pandora’s box of pain and suffering. Our economy cannot handle all of these new arrivals, no matter how badly Biden may want us to. It’s time to think with your heads, instead of your hearts, Democrats!