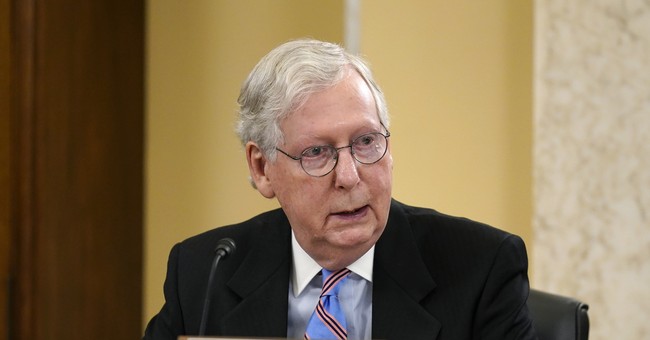 We saw the reaction of Sen. Joe Manchin (D-WV) to the crazy rant from Senate Majority Leader Chuck Schumer attacking Republicans last week, despite the fact that they saved his bacon by allowing a vote on a short-term debt limit increase.

The faces that Manchin was making behind Schumer as he spoke were just classic. Manchin even walked out on him and then later called him out on the rant to reporters. He also reportedly told Schumer that his remarks attacking Republicans were “f**king stupid.”

Looks like the other shoe is dropping on Schumer to prove Manchin right.

Senate Minority Leader Mitch McConnell has now written Joe Biden a formal letter saying that he will not sign aboard another extension in the future, given Schumer’s nasty rant and because he was very concerned “that another reckless spending bill will hurt America.”

Last night, Republicans filled the leadership vacuum that has troubled the Senate since January. I write to inform you that I will not provide such assistance again if your all-Democrat government drifts into another avoidable crisis [….]

Remarkably, even as Republicans saved Americans from his crisis, Senator Schumer kept compounding his failures.

Last night, in a bizarre spectacle, Senator Schumer exploded in a rant that was so partisan, angry, and corrosive that even Democratic Senators were visibly embarrassed by him and for him. This tantrum encapsulated and escalated a pattern of angry incompetence from Senator Schumer.

This childish behavior only further alienated the Republican members who helped facilitate this short-term patch. It has poisoned the well even further.

I am writing to make it clear that in light of Senator Schumer’s hysterics and my grave concerns about the ways that another vast, reckless, partisan spending bill would hurt Americans and help China, I will not be a party to any future effort to mitigate the consequences of Democratic mismanagement. Your lieutenants on Capitol Hill now have the time they claimed they lacked to address the debt ceiling through standalone reconciliation, and all the tools to do it. They cannot invent another crisis and ask for my help.

Now among the reasons McConnell did it was because he thought he was relieving pressure off the filibuster question. They can’t use the debt limit and ‘saving the country’ as an excuse to do in the filibuster. It also removed the argument that Democrats didn’t have time to work out reconciliation to lift the debt limit. Now, they no longer have that excuse. Some Republicans were still unhappy and didn’t even want to give them that, including Sen. Lindsay Graham (R-SC) and Sen. Ted Cruz (R-TX).

But Schumer’s actions then united them against him, with even Sen. Mitt Romney (R-UT), who had gone along with the procedural vote, ripping Schumer for his nastiness — showing even when you reach out to them, Democrats will still try to stomp on you.

But bottom line on the greater issue? Democrats are still stuck between a rock and a hard place, albeit with a little more time to try to figure it out. Now they know, up front, Republicans will not be saving them.