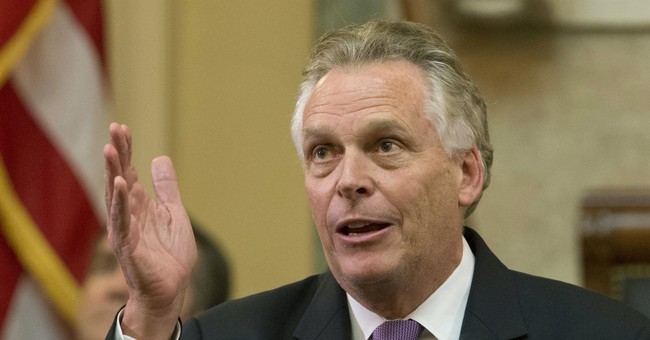 How hard up is Virginia Democratic gubernatorial candidate Terry McAuliffe at this point?

He took a beating from his opponent, Republican Glenn Youngkin, in the last debate, particularly over the issue of parents having a say in their children’s education. McAuliffe got into deep trouble, saying, “I don’t think parents should be telling schools what they should teach.”

Apparently, McAuliffe has never been to a school board meeting and doesn’t think parents have any rights in what is taught to their children.

McAuliffe effectively got called out by former Virginia Democratic Gov. Doug Wilder. “If parents don’t have a say so in terms of their kids’ education, then who does?” Wilder asked rhetorically. On top of that, it seemed that McAuliffe didn’t even understand own state code on parental rights when it comes to the education of their children.

It turns out that, in addition to the several obvious issues with McAuliffe’s position, the former Virginia governor has also blatantly contradicted the state’s own code, section 1-240.1. of which enumerates the “rights of parents” as follows: “A parent has a fundamental right to make decisions concerning the upbringing, education, and care of the parent’s child.”

But McAuliffe went further today on CNN’s “State of the Union,” actually claiming that objections to the teaching of Critical Race Theory (CRT) were a “made-up” plan to “divide people.”

“This is a made-up – This is a Trump, Betsy DeVos, Glenn Youngkin plan to divide people,” McAuliffe said. “It really bothers me. I try to unite people.”

“I really hate to see what Glenn Youngkin is trying to do to Virginia what Donald Trump did to our country,” McAuliffe added. ” I really hate to see the division, the hatred. We’re putting these children in this horrible position. Let’s just be clear. We don’t teach critical race theory.”

Perhaps he needs to speak with the leftists who came up with CRT — and tell them the Republicans made it up?

But when he was pressed with good questions about how he would define CRT earlier this week, he said, “It doesn’t matter.” Watch how badly he does.

“It doesn’t matter,” McAuliffe said. “It’s not taught here in Virginia so I’m not going to spend my time – I’m not even spending my time because the school board and everyone else has come out and said it’s not taught. It’s racist. It’s a dog whistle.”

Some effort to try to “unite people” by attacking parents and calling them racist.

He doesn’t even know what it is and refuses to define it, but he knows it isn’t taught there? Alrighty, now. That doesn’t even pass the smell test. So, all the parents objecting to the issues within their schools are just making it up now? They’re all just Republican agents in the pocket of Youngkin? If so, then McAuliffe is in deep trouble, because it sounds like Youngkin has a lot of supporters, all across the country.

But when you can’t even give the parents who have concerns their due, aren’t even willing to listen to them even if you disagreed with them, then mock them, call them racist, and completely dismiss them, don’t be surprised if they turn around and dismiss you at the ballot box and vote for your opponent. But McAuliffe just keeps digging that hole deeper.