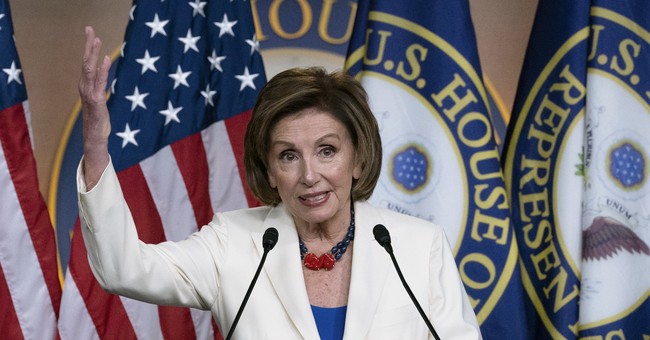 House Speaker Nancy Pelosi (D-CA) was in Rome to speak at the G20 Parliamentary Speakers’ Summit about the Wuhan coronavirus and their climate change agenda.

The House is now on a two week recess, so it looks like Pelosi isn’t working too hard on trying to pass the Biden agenda. Senate Minority Leader Mitch McConnell lambasted Pelosi for running off with the debt limit question still outstanding. “I can only presume she hopes the full faith and credit of the United States will get sorted out without her,” McConnell said. “That is the level of leadership and accountability the country is getting from Washington Democrats who run this country.”

Pelosi was given the honor of meeting with the Pope on Saturday.

Pelosi was also invited to do a reading during Mass at St Patrick’s Catholic American Parish in Rome. But there was some form of a “security incident” according to Paulist Fr. Steven Petroff, rector of St. Patrick’s, who was saying the Mass. The Rome correspondent for The Epoch Times described it as Pelosi being “heckled.”

It’s unclear what the “security incident” was exactly. But I’m just guessing that Joe Biden probably wouldn’t be describing it as “just part of the process” and saying it “happens to everybody” as he did about harassment of Sen. Kyrsten Sinema (D-AZ).

There were massive protests against COVID mandated vaccine passports in Rome at the same time in Piazza del Popolo, not too far away, that looked like they were getting pretty wild. I don’t know if that had any relation to anything.

There was also a ridiculous rumor that Joe Biden might name Pelosi to be his ambassador to the Vatican. Biden put that to rest today by naming former Congressman Joe Donnelly.

But as a Catholic, I have a question for the Pope and Fr. Petroff. Maybe this would have been good if you were able to get her in a room and try to move her on her pro-abortion stance. Otherwise, why are you honoring this woman with a private visit? Why are you inviting her to give a reading or to speak at the Vatican? That’s the kind of thing that you do when you agree with what she is saying. Are you now just cool with her being pro-abortion?

They did all this despite the fact that her own Archbishop, Salvatore Cordileone, has been trying to pressure her to give up her abortion stance. He has called on Catholics to pray for her soul that she might have a conversion on the subject.

“A conversion of heart of the majority of our congressional representatives is needed on this issue, beginning with the leader of the House, Speaker Nancy Pelosi,” Cordileone said in a statement, referring to the issue of abortion.

“I am therefore inviting all Catholics to join in a massive and visible campaign of prayer and fasting for Speaker Pelosi: Commit to praying one rosary a week and fasting on Fridays for her conversion of heart,” he said.

When you’re inviting her to do a reading at Mass, you’re not exactly calling her out or explaining to her what she’s doing wrong. You’re actually suggesting that people should listen to her. Just completely the wrong message.