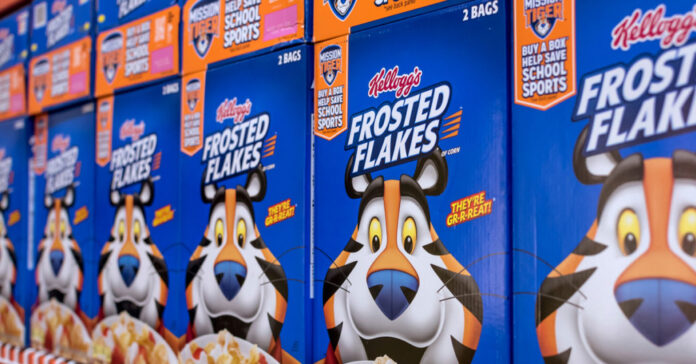 Tony the Tiger is finally getting some long-overdue rest. Employees at Kellogg are saying how working there ain’t all that gr-r-r-eat. They have some issues needing to be fixed, pronto. Until such time, as the infamous “Soup Nazi” would say on the TV comedy “Seinfeld,” no Frosted Flakes for you! Or anyone. They’re on strike.

Every cereal-making machine in every plant was turned off as approximately 1,400 employees marched out the front doors. The plants are located in Omaha, Nebraska, Memphis, Tennessee, Battle Creek, Michigan, and Lancaster, Pennsylvania.

Based out of the Battle Creek location, Kellogg’s powers that be have been scrapping with Omaha’s local union for over a year. Union chapter president Daniel Osborn said the strike revolves around low pay, a recent reduction in retirement benefits, lousy benefits which include losing the premium health package they once had and only receiving a small portion of their pay for holidays and vacations.

President of the Bakery, Confectionery, Tobacco Workers, and Grain Millers International Union, Anthony Shelton alluded to a catch-22. “The company continues to threaten to send additional jobs to Mexico if workers do not accept outrageous proposals that take away protections that workers have had for decades.”

The spiel about sending more work to Mexico is what finally poured a bucket of fire ants in Osborn’s trousers. “A lot of Americans probably don’t have too much issue with the Nike or Under Armor hats being made elsewhere or even our vehicles, but when they start manufacturing our food down where they are out of the FDA control and OSHA control, I have a huge problem with that,” he said.

Kellogg execs claim their offer to the employees was generous and would average out their salaries at $120,000 annually.

Spokesperson Kris Bahner said, “We are disappointed by the union’s decision to strike. Kellogg provides compensation and benefits for our U.S. ready-to-eat cereal employees that are among the industry’s best.”

Osborn fully foresees the company bringing in temporary thug labor to break through lines and resume operations. If this happens, he recommends not buying the product for a while since they won’t have a clue what they’re doing. Kellogg has already admitted to “implementing contingency plans.”

Staying open during the pandemic has taken its toll on employees who have had to work 12-hour shifts around the clock, seven days a week. Osborn said, “The level we were working at is unsustainable.”

Kellogg isn’t the first food manufacturer to experience this scenario. In Topeka, Kansas over 600 Frito-Lay employees walked out this past June. It had to do with being forced to put in ungodly hours due to the pandemic. The strike ended in July when the employees forced their hands, causing corporate to fold theirs. Game over.

When Nabisco’s parent company, Mondelez International, announced plans to start shuffling some jobs down Mexico’s way, plants in all five U.S. states retorted with, “like hell you will.”

The same international union that’s stampeding their white horses to the rescue of Kellogg employees, slaughtered the wishes of Nabisco’s corporate weenies and ended the strike just last month with a shiny new ratified contract. Repeat: Game over.

Kellogg is making the mistake of placing the value of its employees only on their salaries. Granted, if they truly are offering an average of $120K, that’s not so bad. But for their workers who spend a majority of their adult lives in the confines of a cornflake factory, there is so much more than their bosses are capable of seeing.

Outside of working 12-hour shifts, seven days a week, many of them have families, significant others, pets, and probably sleep, they’d like to catch up with and on. And they’d like to be able to take care of their families and their own personal medical needs with only the best of care and at a reasonable out-of-pocket cost. And they’d like some paid time off once in a while in exchange for their hard work and dedication. Then, there’s that retirement thing…

They’ll end the strike soon or they won’t. Right now it’s all in the cereal bowls of the flakey execs but Tony’s already told them not to rush. He’s enjoying his leisure time, paid or not.