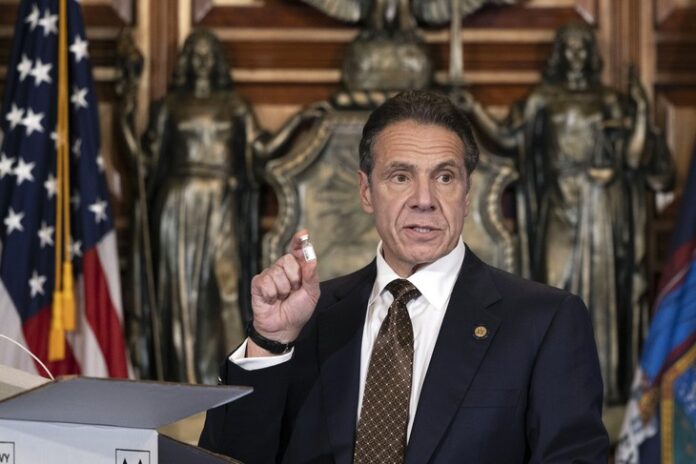 Andrew Cuomo is the face history will never forget as the killer of New York’s elderly population. Not only has Cuomo abused women and killed the elderly, but now it seems that he put the older population last when it came time to roll out the vaccine.

Logic and compassion should have dictated to the old man himself that the most vulnerable people should receive the shot. But that is just not the case with Andrew Cuomo. He was found politicizing the vaccine and giving it to people within organizations that were supporting him.

And if that was not enough, the lustful Democrat was being praised as some kind of COVID-19 god with the way he handled things. The media is so twisted that they cannot even see the heinous crimes committed by their god. They would instead attack Donald Trump and the way he handled the vaccine and the pandemic, which he handled perfectly as he allowed each state to make decisions for themselves.

While the president was being attacked for helping the nation, Andrew Cuomo was back home looking for selfish ways to ensure that his immediate family had access to the COVID tests before anyone else could ever see that they would receive one.

I must have missed CNN’s coverage of this. Of course @CNN was aware of it, right? @ChrisCuomo informed them of his special treatment from the governor, right? Or maybe he didn’t. Perhaps @brianstelter
will clear it up.

Say, has Chris not been doing his show this week? https://t.co/hlkMzXmrUF

One would think that Andrew Cuomo would be playing it safe because of all of the trouble that he is facing. But defiance is his middle name. When the testing was developed and rolled out, Cuomo took his brother, mother, sister, and friends and got them tested for the virus. Tests during the early stages of the pandemic were rare. But somehow, he was able to locate a few for his personal needs.

Cuomo’s CNN brother even had a health staff person from the state come to his home to administer the test. The state troopers then rushed those tests to the lab, where they would be processed and recorded. Cuomo acted like the tests were life-or-death issues. Those troopers could have been out saving lives instead of attending to the lord of the castle.

Rich Azzopardi is Cuomo’s spokesperson, and he stated, “In the early days of this pandemic, when there was a heavy emphasis on contact tracing, we were absolutely going above and beyond to get people testing — including in some instances going to people’s homes, and door-to-door in places like New Rochelle — to take samples from those believed to have been exposed to COVID in order to identify cases and prevent additional ones.”

Weird, I just checked CNN's homepage and they don't have a story up about this yet. Must be a tough one to get confirmed 🤷‍♂️

By Azzopardi’s own admission, it looks like Cuomo’s entire family should have been placed in bubbles for containment, assuming that they had been exposed. The Democrats were looking out for their own skin and could have cared less about anyone else.

Donald Trump put America first all the way through the pandemic. He rushed the production of a vaccine that is doing excellent results. He helped pave the way for massive testing to be done to gather information about the virus. He had even suffered through the virus himself and beaten it, proving nothing is impossible.

Andrew Cuomo selfishly took away resources that were needed to track down the deadly virus. He took them and crookedly used them on his family without cause. He then demanded that the state troopers rush them over to the lab for testing. At last check, the state troopers were not his personal taximen.

And there is no way that his brother Christ Cuomo would ever want to report on the silent crimes his brother had done because he was part of the coverup. Had the word gotten out that Governor Cuomo had acted the way he did, people would have demanded his head on a platter. And the poor souls that were killed because of his selfish orders would still be alive today.