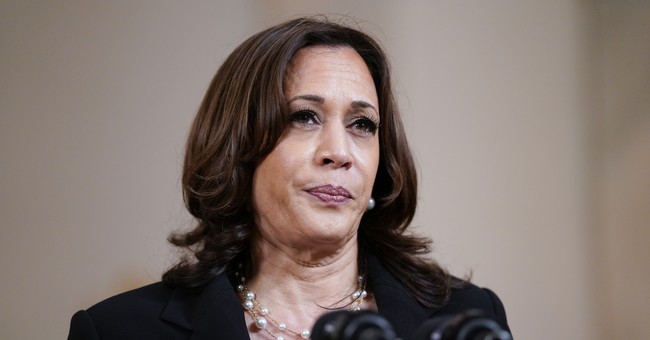 Someone clearly had a chat with Kamala Harris about her negatives — that she needs to come across as more likable.

Harris has the same problem that Hillary Clinton has. They are both not likable characters with a disconcerting cackle that’s a tell for when they don’t want to answer whatever question you just asked them.

While Clinton has never addressed her issues, preferring to blame everyone else for her own failures, and now has ended up selling fiction , rather than being president, as a result, it looks like at least for a limited moment, Kamala Harris was trying to remake her delivery. Except it’s so overdone, it comes across as inauthentic and overly saccharine. It’s like Hillary’s “I carry hot sauce in my purse” effort, just utter pandering. And like that hot sauce effort, it’s a complete fail.

You can decide for yourself.

Here’s Kamala Harris talking to kids about science. Or can we say, talking down to them a little bit — they’re not five years old. She just might win the overacting award.

Now why is she talking to kids about science? YouTube is having a special series that features her called, “Get Curious with Vice President Harris.” The kids will do things like visit her at the Naval Observatory, where she presently resides. Horrible title, by the way.

“My mom was a scientist. She would take us to the lab with her on the weekends and after school because she had to work long hours,” Harris, who leads the National Space Council, said during the special.

“I just love the idea of exploring the unknown. We’re going to learn so much as we increasingly are curious and interested in the potential for the discoveries and the work we can do in space. That’s one of the things I’m most excited about,” she added.

Now, I’m glad that Kamala has so much time that she gets to hang out with kids and make a video series.

But can one remind her that maybe she has an alleged job that she’s supposed to be doing? You know, that thing from which she seems to have gone AWOL? She’s supposed to be delivering some kind of results on the border, which is still blowing up and is anticipated to possibly have 400,000 people encountered entering illegally this month.

Speaking of AWOL, Harris went on a mysterious overnight trip to Palm Springs, refusing to even tell anyone why she was going and not even allowing reporters to see her taking off, which makes one wonder what she was trying to hide. She also seems to have gone missing when it comes to pushing the Biden legislative agenda. Now perhaps, she’s trying to distance herself a bit because of Biden’s incredible unpopularity at this point. But, she’s still actually supposed to be doing something in her job.

Kamala may try to surround herself with sweet kids, but it doesn’t make her look any better as a candidate — nor does it make her look like she’s done anything successful in the job she’s supposed to be doing.